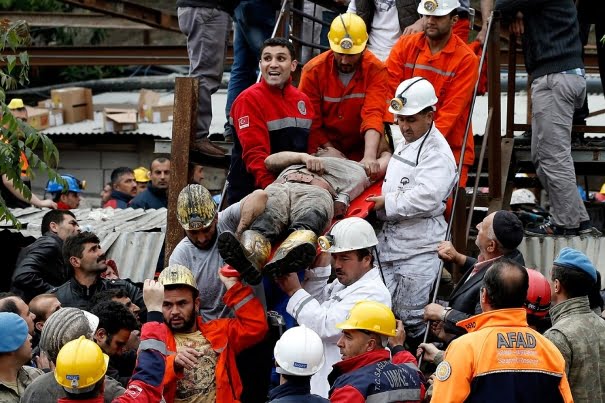 TURKEY’S prime minister, Recep Tayyip Erdogan, faces public fury after the country’s worst-ever industrial accident. At least 282 miners died after an explosion at the Soma mine in the western province of Manisa on May 13th. Rescue workers battled to rescue hundreds more feared to be trapped in galleries where fires continued to rage. More than 350 were saved. Taner Yildiz, the energy minister, declined to say exactly many people were inside the mine when the accident happened.

A stream of dead miners, faces blackened by coal, were pulled out, as crowds of stricken relatives strained to identify loved ones. “Our hopes are fading,” Mr Yildiz conceded. Most of the dead were killed by carbon monoxide poisoning. The government announced three days of national mourning. Mr Erdogan cancelled a trip to Albania to go to Soma, where he pledged a thorough investigation, was booed, and sought refuge in a shop, only to scuffle with furious protesters.

The Soma accident will focus new attention on Turkey’s dismal coal-mining safety record. Nearly 600 miners have died since 1983, before this week. “Eighty percent of these could have been avoided if necessary safety measures had been taken,” fumed Mahmut Arslan, chairman of the Hak Is workers’ confederation. “The priority is not safety but profitability.” Turkey’s economy is energy-hungry: the bill for energy imports is second to China’s.

The labour ministry gave the Soma mine a clean bill of health in March. On a visit last year, Mr Yildiz heaped praise on it. Yet Ozgur Ozel, a deputy from the opposition Republican People’s Party (CHP), petitioned the parliament in April to launch fresh inspections, saying he had been inundated with complaints from his constituents about safety conditions. His bid was rejected by Mr Erdogan’s Justice and Development (AK) party. Citing European figures from the mid-19th century, Mr Erdogan insisted such accidents were “natural” and happened “all over the world”. In so doing he “revealed the truth that we [Turkey] are a century behind the times,” tweeted Sezin Oney, a liberal commentator.

The disaster may yet unleash more mass protests of the kind that rocked Turkey last summer. These were prompted by government plans to build a shopping mall over Gezi park in Istanbul. Hundreds of protesters have already clashed with police, calling the Soma accident “murder” and demanding that the government resign. In the Istanbul metro commuters played dead on platform floors in solidarity with the miners. The trade unions and the pro-Kurdish People’s Democracy Party separately called for a nationwide strike on May 15th. All this is unwelcome news for Mr Erdogan who, buoyed by AK’s big win in the March 30th local elections, has set his sights on the Turkish presidency when it comes up for grabs in August.

His critics, now led by Fethullah Gulen, Turkey’s most influential Muslim cleric, who commands an empire of schools and media outlets from self-imposed exile in Pennsylvania, will seize on the Soma tragedy. A campaign centred on corruption claims linking Mr Erdogan and his family to shady property deals and kickbacks from business cronies is said to have been masterminded by Gulenists in the police and in the judiciary. Mr Erdogan has launched what he admits is “a witch hunt”, demoting and reshuffling hundreds of Gulenists within the bureaucracy.

In Soma he warned against “extremists seeking to exploit this tragedy.” Yet even pro-AK commentators have called for the energy and labour ministers to go.