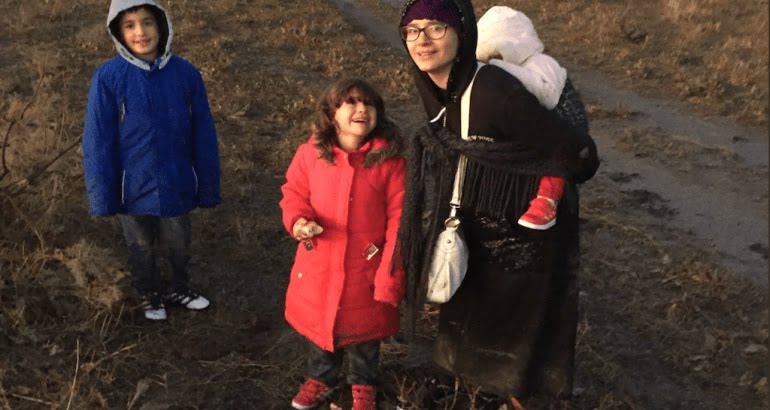 A mother of three children aged 3, 7 and 10, Uludağ was a civil servant in the Karabağlar district governor’s office in İzmir province until she was dismissed over alleged links to the Gülen movement by a government decree issued under an ongoing state of emergency declared in the aftermath of a military coup attempt on July 15, 2016. The woman also remained behind bars for three months and then released on judicial probation.

The Turkish government accuses the Gülen movement of masterminding the failed coup, although the movement strongly denies any involvement.

Her husband, Mehmet Ali Uludağ (38), had to leave Turkey due to a number of investigations launched into him and detention warrants issued for him over his alleged ties to the movement. He first fled to Greece and then sought asylum in Germany.

As he succeeded in obtaining a residence permit in Germany, his wife Esma Uludağ, together with her three children, crossed the Evros River about six months ago and took refuge in Greece. The woman and her children were waiting in Athens for family unification.

However, Esma Uludağ unexpectedly suffered a stroke on Saturday night. She was taken to a hospital in an ambulance that reportedly took 40 minutes to arrive at the scene. She passed away despite doctors’ efforts in the hospital.

Uludağ’s body is reportedly going to be taken to Turkey for funeral services after completion of an autopsy and official procedures in Greece.

According to the aktifhaber news website, Esma Uludağ was an avid student and had several university degrees. She graduated from the physics department of İzmir-based Dokuz Eylül University in 2007. She had a master’s degree from Celal Bayar University in Bolu in 2009 and later graduated from the Gediz University Vocational School of Justice as the most successful student, having an average grade of 3.89 out of 4. Esma received her diploma with her children, 8-year-old Veli Said, 4-year old Müşerref Zümra and 38-day old Ceyda.

Thousands of people have fled Turkey due to the witch-hunt carried out by the Turkish government against sympathizers of the Gülen movement. Many tried to escape Turkey by illegal means as the government had cancelled their passports like thousands of others. On Feb 13, 2018 at least three people died and five others went missing after a boat carrying a group of eight capsized in the Evros River while seeking to escape the post-coup crackdown in Turkey.

Greece’s asylum service says more than 1,800 Turkish citizens requested sanctuary in 2017, a tenfold increase over the previous year. This puts Greece in second place behind Germany as an EU destination of choice for Turks believed to be fleeing the sweeping measures following the coup bid.

Turkish refugee Esma Uludag, who lost her life in Athens, is seen on a mobile phone recording of the difficult transition process from Turkey to Greece. Walking hopefully to freedom with her baby on her back and other kids around Uludag sends prayers to the rest left in Turkey. pic.twitter.com/cSdR8MOu45