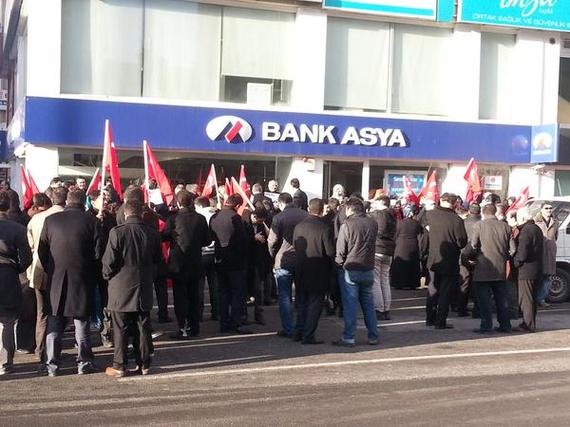 he typical image of a bank under duress is a long line of customers trying to get their money back. In Turkey this week, it was a queue of people trying to put it in.

Sayida Kayipova went to a Bank Asya branch in Istanbul’s Gultepe neighborhood, near the main financial district, on Wednesday. A customer for 6 years, the 31-year old chemistry PhD student was opening an account for her 7-yr old daughter’s 150 ($62) liras of savings, joining a line of customers to deposit funds a day after the government had seized the lender.

“I feel like an injustice has been committed so I wanted to take a stand,” she said. “Swooping down in the middle of the night like that is an attempt to scare people and manipulate our perceptions, but it will only pull us together.”

TV reports of customers queuing to deposit money at Bank Asya branches after the takeover follow a similar phenomenon in September, when partisans of the Gulen movement advertised the sale of electronics, cars and even apartments with the stated purpose of putting the proceeds into Bank Asya accounts.

That was in response to months of pressure, which included the suspension of trading in Asya’s shares on Istanbul’s stock exchange and Erdogan telling businessmen that accusations of attempts to bankrupt the bank missed the mark as the lender was “already bust.” The government attributed the takeover earlier this week to Asya breaking banking regulations on transparency.
“They’ve sent money through electronic transfer, they’ve come through my door with cash in hand; sometimes it’s tens and sometimes it’s thousands of liras, but it’s been very busy,” Mehmet Fatih Alsac, manager of Kayipova’s Bank Asya branch, said. “It’s got to the point where it’s just not rational any more and people just want to support the bank.”

Larger investors have also stepped in to keep the bank afloat, contributing 225 million liras in a capital increase in November, even after the bank’s assets shrank by half and it recorded its first-ever unprofitable quarter.

Regulatory obstacles for Asya started after Erdogan and former ally Gulen publicly fell out over a corruption probe into senior members of Erdogan’s government, which the former prime minister said was a plot to unseat him. Erdogan purged thousands of members of the police and judiciary in response, and none of the charges have resulted in convictions.

In the aftermath of the corruption scandal, state-owned companies like Turkish Airlines said they withdrew deposits from the lender.

Prime Minister Ahmet Davutoglu, speaking at a rally in northwestern Kastamonu province, said on Wednesday the takeover was completely legal. “Why should a religious congregation have a bank, a prosecutor, a legal arm, a media arm?” he said in reference to Gulen’s global movement.

Ahmet Beyaz, replaced as chief executive officer in the state takeover, countered in an interview in pro-Gulenist paper Zaman published early Thursday that the move was an attempt to scare depositors into withdrawing their money.

Where a run on deposits might be expected, a run of deposits seems to have materialized instead. People queued up outside the bank’s branches holding signs that said, “We’ll not stop, we’re here to prop it up.”

Still, customers had called in to check that their savings were still there. Like the elderly gentlemen who feared for the 25,000 liras he had gathered for his pilgrimage to Mecca and, while Turkey guarantees citizens’ deposits up to the value of 100,000 liras, there had been withdrawals, said Alsac, the Kayipova branch manager.

“We’ve ended the day up though, without a doubt” he said, adding that the bank was inviting a gold expert into the branch to value trinkets customers were expected to put into bullion savings accounts popular at the country’s four Islamic lenders.

Isik Okte, investment strategist at BNP Paribas’s local unit TEB Invest, witnessed the commotion outside Asya’s head office the day after the takeover. He saw riot vehicles and Turkish flags, as well as placards reading, “We’ve come to lie down in front of our bank.”

“It was surreal,” Okte said. “There were crowds of young people, and women who’d brought their families, and grilled meatball vendors who’d turned up to feed the crowds.”

Depositors’ support for the ailing bank was mirrored by stock market investors. While Turkey’s main index was the world’s worst performer, in dollar terms, Bank Asya ended the day after the takeover 3.3 percent higher.

Published on Bloomberg Business, and also appeared on The Chicago Tribune, 05 February 2015, Thursday