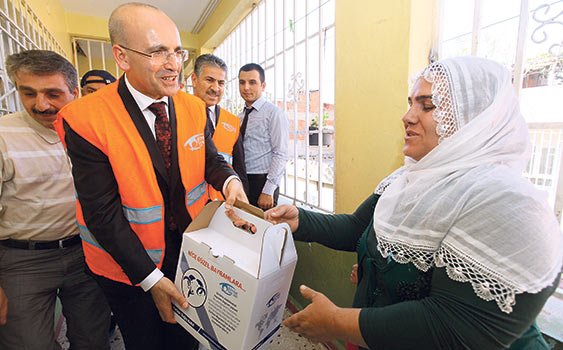 Mehmet Simsek, the Minister of Finance, spent the first day of Eid-Al-Adha at his hometown, Batman, an ethnically diverse city in the Southeastern Turkey. There he attended Kimse Yok Mu Association’s brotherhood event.

When Simsek was told that a thousand volunteers from outside the city were gathered in Batman for the Eid-Al-Adha, he replied “Then, I’d be the thousand and first one!” He, then helped with the meat distribution efforts to the poor families and celebrated the Eid with them. A thousand of tens of thousands of volunteers, who went to 7 continents for meat distribution, started a brotherhood campaign in Batman instead of spending the Eid-Al-Adha with their families. Volunteers will use the meat distribution as an opportunity to meet some 5,500 families and establish a peaceful connection with them.

Mr. Simsek, who said “I’m the thousand and first volunteer,” joined the rest of the volunteers. He underscored that he admires Kimse Yok Mu’s efforts and said, “The aim is not to distribute meat to families but a humble step towards brotherhood and solidarity from east, west and every corner of the world. God bless everyone that is part of the efforts in the Kimse Yok Mu Association. Batman and the rest of Turkey will have more powerful connection via these efforts”.