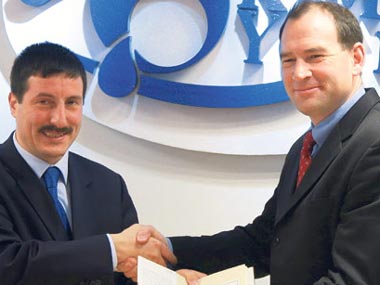 The certificate was presented to Kimse Yok Mu officials in İstanbul by Carter's consultant, Ryan McDonald (R), on behalf of Carter

The personal foundation of former US President Jimmy Carter has awarded a certificate of appreciation to Turkish aid organization Kimse Yok Mu (Is Anybody There) for the association’s worldwide charitable activities.

The certificate was presented to Kimse Yok Mu officials in İstanbul by Carter’s consultant, Ryan McDonald, on behalf of the former president.

McDonald, known for his health charities and contribution to peace worldwide, visits countries around the world on behalf of the president and meets with international civil society organizations. Also manager of the Carter Center in Europe, McDonald regularly meets with health and peace organizations. Kimse Yok Mu caught McDonald’s attention due to their health aid to Africa and peace activities in eastern and southeastern Turkey.

Visiting Turkey to present the certificate of appreciation to Kimse Yok Mu, McDonald said Carter’s foundation and the Turkish association work for the same goals of world peace and world health and added that the two organizations can work in cooperation in the future. The Atlanta-based Carter Center mainly deals with peace and health work. Active for 25 years, the institution focuses on six basic illnesses including AIDS and cholera. The center attempts to establish health systems in needy countries and puts forward nonpartisanship as one of the five principles guiding them.