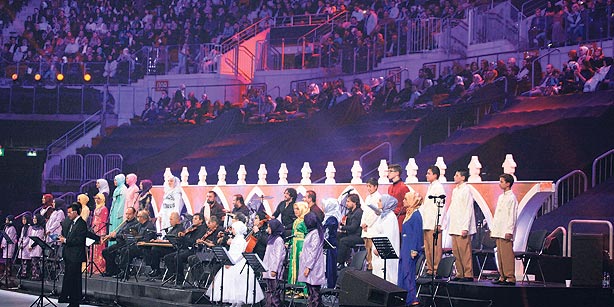 Holy Birth Week marks the Prophet Muhammad’s birth and takes place between April 14 and 20 each year across the Islamic world.

The Holy Birth Week event was held at the ISS Dome, a multi-use indoor arena, in Düsseldorf on Saturday evening with the participation of 7,200 Turks living in Germany. The celebration was organized by the Düsseldorf Ebru Culture Center. Participants were treated to recitations of naats, ilahis (praising God and extolling the characteristics of the Prophet Muhammad) and kasides (odes mostly written for the Prophet) performed by about 350 international students from Turkish schools across Europe. There were Albanian, Bosnian, Turkish and Kurdish students performing during the ceremony.

The host of the event was renowned Turkish writer and poet Bedirhan Gökçe, who stated during the event: “May God never give the chance to those who want to disturb the unity of our country [Turkey]. I hope those dark clouds over the country will be eliminated as soon as possible. And everybody should be aware that jihad cannot evolve from a fight between two brothers. Only sedition can evolve from it.”

The ceremony was broadcast live on Mehtap TV, Irmak TV, Bugün TV and Samanyolu News TV on Saturday evening. A model of the holy Kaaba in Mecca was on stage during the performances, and the international students circled around the model in reference to Islam’s annual hajj pilgrimage. The ceremony also attracted great interest on social media. The event became a top tweet in Turkey and the world under the hashstag #OnaSelamOlsun.

Speaking during the ceremony, Ebru Culture Center Chairman Veysel Yeşilöz said they organized the event to bring together Turkish people living in Europe on the occasion of the anniversary of the Prophet Muhammad ‘s birth.

Meanwhile, a celebration was held at the Ankara Arena sports hall in Ankara on Saturday night to mark Holy Birth Week with the participation of President Abdullah Gül and his wife, Hayrünnisa Gül, Deputy Prime Minister Emrullah İşler and Republican People’s Party (CHP) leader Kemal Kılıçdaroğlu. The event was organized by the Religious Affairs Directorate. Speaking during the event, Gül stated that the full understanding of Prophet Muhammad’s teachings will encourage an atmosphere of peace and love in the world.