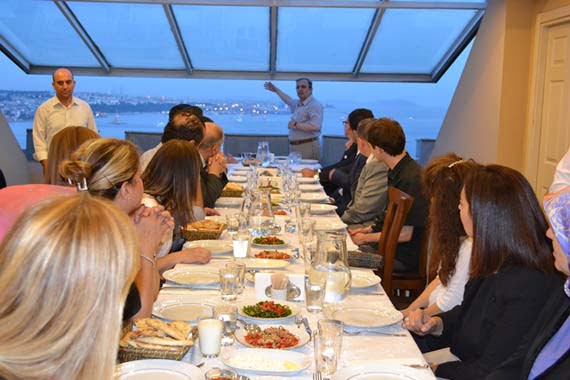 The first series of “Families Meeting” project, intended to bring together the members of diverse cultures, faiths and ethnicities and let them get to know each other, by Intercultural Dialogue Platform (KADIP) in cooperation with Foundation of Solidarity (DIDADER), came to an end with a final gathering at Syriac Catholic Church.

Following the president of Syriac Catholic Church Zeki Basatemir’s speech kicking off the night, the participant guests also shared their project experiences. The female participants expressed their thoughts on the project as follows: “For the first time in our life, we had the chance to meet another segment of society so intimately.”

Journalists and Writers Foundation Vice-President Erkam Tufan Aytav, whose family was partnered with Basatemir’s, such neighborly relations, which are indeed typical traditions, have been overplayed in the society as if they are extraordinary, due to a 70-80 year long trauma.

Hazim Sesli, having exchanged visits with Armagan Tokuc as partner families, shared their experiences noting that the formal conversations during the first hours were replaced with a friendly atmosphere later during the visits. “As we get to know each other, I realized how little the difference between us is. We saw the misinformation and biased information imposed on us since childhood have been purified thanks to these gatherings. The Tokucs felt like our family members to us” Sesli said.

JWF Vice-president Cemal Usak touched upon the necessity of preserving the differences between members of diverse cultures and faiths. Usak further underlined such visits should be done with “accepting the other with his/her differences” perspective and that they should carry on.

In his closing remarks, Zeki Basatemir, as the host, reflected on their whole family visit experiences. “We had conversations and talked about tomorrows. We saw that we are feeling happy or sad over the same things. We were alienated but, hopefully, this is not going to be our fate. This scenario will change thanks to similar organizations by KADIP and activities will carry on with better projects” Basatemir said.

At the conclusion of the event, photo albums of pictures taken during the visits were presented to the participants by KADIP.