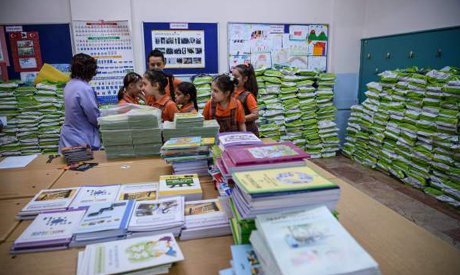 School children gather to receive their text books on the first day back at school on September 19, 2016 in Istanbul (Photo: AFP)

Turkish schools reopened Monday for the first time since the July 15 coup following a summer which saw tens of thousands of teachers sacked or suspended over “links” to the plotters or to Kurdish rebels.

After a rogue military faction tried to oust President Recep Tayyip Erdogan in mid-July, Ankara embarked on a massive crackdown, dismissing and detaining tens of thousands of people within the judiciary, the police and the education system over alleged links to the plotters.

Students arriving at school on Monday were handed pamphlets from the education ministry commemorating “the triumph of democracy on July 15 and in memory of the martyrs” as well as their usual school books, an AFP photographer said.

Pupils will be shown two videos about the coup, the ministry said, including footage of Erdogan reading the national anthem alongside images from the night of the coup showing tanks and war planes firing in the capital Ankara.

One video shows the moment when people took to the streets in their thousands in Istanbul and Ankara to counter the coup attempt, which claimed nearly 270 lives, among them 24 putschists.

In schoolyards, students observed a minute of silence for the victims and a prayer was said.

Union chief Ozev warned that children’s education could suffer if inexperienced teachers were called in to fill the staffing shortages.

Speaking to AFP, he said the school year was likely to be characterised by “general chaos” due to the fact “there are 40,000 to 50,000 vacancies and no preparation on the side of the ministry of education.”

Cigdem, a teacher in Istanbul, attacked the government’s actions as opportunism as she defended her colleagues.

“We won’t them let do that, we will not let down our schools. We are not coup-mongers or terrorists, we are teachers.”

Authorities have blamed the attempted coup on Erdogan’s arch-enemy, the US-based preacher Fethullah Gulen, and followers of his moderate Islamic “Hizmet” movement which encourages its members to work in the public sector.

Gulen, who lives in self-exile in the United States, strongly denies any involvement in the coup, and the mass crackdown on his alleged supporters has sparked alarm among Turkey’s Western allies.

Tens of thousands of staff in the education sector alone have been suspended or dismissed, while another 11,500 teachers suspected of links to the outlawed Kurdistan Workers’ Party (PKK) were suspended earlier this month.

The PKK, which has waged a insurgency against the Turkish state since 1984, is considered as a terror organisation by Ankara, the United States and the European Union.

There have been almost daily attacks by the PKK since a two-year ceasefire collapsed in July 2015, while the Turkish authorities have stepped up their military campaigns in the restive southeast in response.