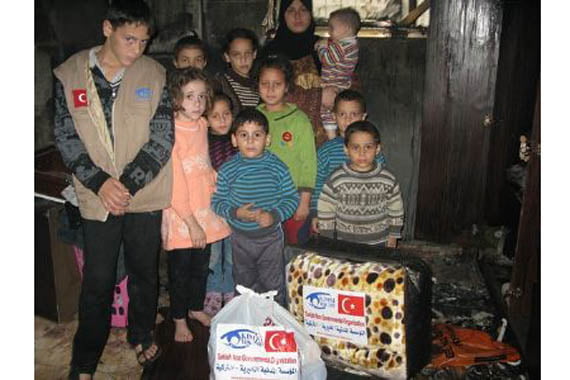 Having arrived in Sudan’s capital city, Hartum, where the recent flood wrecked thousands of residences, Kimse Yok Mu Foundation (KYM) volunteers delivered a total of 300 tents along with food and clothing aid to the local families in need. In addition, 200 children of the orphanage to be renovated by KYM were also provided clothing aid, as a part of the relief efforts.

KYM has geared up to heal the wounds of flood-wrecked Sudan. The foundation volunteers, who have left for the country in order extend a hand to the flood victims, initially contacted the local administrations in Hartum to inquire into the locations in need. In cooperation with local relief organizations, the volunteers have been trying to access the locations in urgent need. In one of the neighboring regions, they distributed five truckloads of tents and food to a total of 300 victim families listed in advance with the contributions of the local administrations.

The institution “Al-Birr and Tawasul Conducts”, which was initiated by the Sudanese ministers’ wives, contributed to the aid delivery as well. The families in the disaster zone are going to live in the tents provided by the foundation, until their houses are rebuilt.

The orphanage to be home to 200 pupils being renovated

Following the contacts with local officials, Kimse Yok Mu has taken on the renovation of a deprived orphanage near Hartum, which has got underway. The foundation officials accompanied with the volunteers, including the Turkish artist Nihat Dogan, recently made a visit to the orphanage in order to deliver aid packages from Turkey and to check up on the progress. A total of 200 pupils to stay and attend hafiz training program at the orphanage were provided clothing aid during the visit.