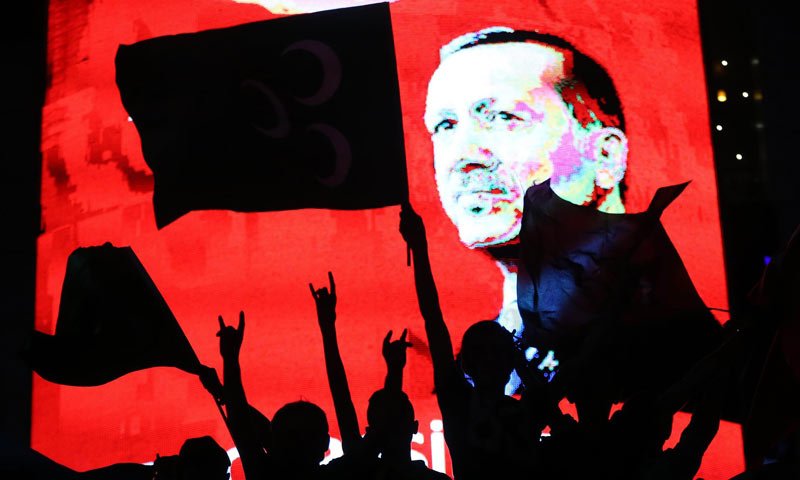 Supporters of President Recep Tayyip Erdoğan during a rally in Ankara on Wednesday. ‘It is too early to say whether Mr Erdoğan is using the coup attempt to further his long-held plans of a constitutional overhaul that would further enhance his power.’ Photograph: Adem Altan/AFP/Getty Images

Those who cannot remember the past are condemned to repeat it.
― George Santayana, Philosopher

On February 27, 1933, a fire broke out in the Reichstag building, which housed the German Parliament in Berlin.  Although the fire’s origins remain shrouded in mystery, the Nazi Party blamed the attack on communists plotting to overthrow the German government.  Making an appearance at the scene of the fire, Chancellor Adolf Hitler was surprisingly jubilant: “You are now witnessing the beginning of a great epoch in German history,” he continued, “This fire is the beginning.”

Following Hitler’s lead, the German Cabinet swiftly declared a state of emergency. President Paul von Hindenburg was convinced to issue the now-infamous Reichstag Fire Decree, which suspended almost all civil liberties in Germany.  SS and SA agents immediately began a widespread cleansing of all opponents of the Nazi cause, extending well beyond the communists blamed for the arson.  Using the state of emergency as a pretext, the Nazis began to consolidate control and establish a one-party dictatorship in Germany with Hitler at the helm.

Undoubtedly, there are real differences between the Reichstag fire and last Friday’s coup attempt in Turkey.  Although historians disagree, the Reichstag fire may have been a masterfully executed hoax, but the Turkish coup attempt will rank among the most incompetent in history, with the plotters severely miscalculating the monumental effort required to topple a stable government. And despite speculations to the contrary, there is no credible evidence that President Recep Tayyip Erdoğan staged the Turkish coup attempt.

Despite significant differences, some unsettling resemblances also exist between the two events.  The Turkish government, like its historical German counterpart, has seized the event as an opportunity to conduct widespread purges of political dissidents and consolidate power.   Following the coup, President Erdoğan immediately vowed revenge against the coup plotters and warned that they would pay “a heavy price for their treason.”  He specifically pointed the finger at Fetullah Gülen, an influential Islamist preacher living in self-exile in Pennsylvania with a loyal following in Turkey.  An alliance of convenience between Gülen and Erdoğan broke down in recent years, as Erdoğan blamed Gülen’s followers within the police and the military for a sweeping corruption investigation against Erdoğan and members of his Cabinet in 2013.  A clash of ideologies soon turned personal, locking the two men in an endless vendetta.

President Erdoğan, apparently a firm believer in the adage that a good scandal should never go to waste, authorized an immediate crackdown against so-called Gülenists.  The numbers are dizzying.  In less than a week after the coup attempt, the government detained 6,823 soldiers, 2,777 judges and prosecutors (including two judges on the Turkish Constitutional Court), and dozens of governors.  To top it off, 49,321 civil servants were removed from their positions, and the teaching licenses of 21,000 private school teachers were terminated. Nearly 1,600 university deans were asked to resign, and academics at Turkish universities were required to return home and refrain from traveling abroad.  The replacement of these individuals with government loyalists will provide President Erdoğan direct control over numerous institutions.

The massive scale of the purge extends well beyond those who might have had connections to the coup plotters.  It strains the imagination to suppose that tens of thousands of individuals from different walks of life secretly planned and executed a coup attempt.  Under the facade of rooting out coup plotters, a colossal witch hunt has been authorized against President Erdoğan’s opponents.

This witch hunt began well before the Cabinet’s issuance of a state of emergency on Thursday.  The Parliament, controlled by the Justice and Development Party co-founded by President Erdoğan, approved the Cabinet’s decision on Thursday afternoon by a vote of 346 to 115.  The state of emergency is currently scheduled to last for three months, but it can be extended by the Parliament.

A coup attempt against an elected government undoubtedly poses a serious emergency for the democratic order and must be condemned in the strong terms.  But the Cabinet issued the state of emergency after the emergency that prompted this extreme measure had been extinguished.  The coup attempt was put down swiftly and decisively.  With nearly 10,000 detained, and over 50,000 fired or suspended, one is left wondering what emergency remains.  Any suspected coup plotters that somehow managed to escape this week’s sledge hammer can be rooted out and arrested using the same pre-emergency measures.  In a Freudian moment that harkened back to the Reichstag fire, Justice Minister Bekir Bozdağ insisted that the state of emergency was necessary to “put out the fire.”

The breadth of the state of emergency is nothing short of sweeping.  It allows the Cabinet to rule the country by decrees that are immune from constitutional review.  Although the decrees are subject to parliamentary override, this power will remain unused by a Parliament firmly at President Erdoğan’s beck and call.  Under emergency legislation triggered by the Cabinet’s declaration, the Turkish government also has the authority to impose curfews, curtail constitutional rights with impunity, prohibit demonstrations, censor publications, and conduct searches and seizures without warrants.

Robert Jackson, who served as a justice on the U.S. Supreme Court and chief U.S. prosecutor during the Nuremberg trials, was well aware of the dangers posed by emergency powers. In a famous case that invalidated President Harry Truman’s war-time seizure of domestic steel mills, Justice Jackson penned one of the most influential Supreme Court opinions in history.  He argued that the executive’s invocation of the emergency power must be carefully scrutinized, despite President Truman’s insistence that the seizure of the mills was essential to supply the Korean War effort.  Emergency powers, Jackson feared, “would tend to kindle emergencies,” allowing the executive to manufacture or exaggerate social and economic crises to expand his own powers and threaten the democratic order.

These fears may have found a home in Erdoğan’s Turkey.  And there is no Justice Jackson to stand in Erdoğan’s way.  Having curtailed all checks and balances against his powers, Erdoğan will further consolidate control, promote with new vigor his agenda to create a presidency with sweeping executive powers, and authorize additional crackdowns to keep his opposition at bay.

For Turks, things are bound to get much worse before they get better―if they ever do.

Ozan Varol is a native of Istanbul, Turkey, and an Associate Professor at Lewis & Clark Law School in Portland, Oregon.  He’s the author of the forthcoming book, The Democratic Coup d’État, which will be published by Oxford University Press in 2017. Download a free chapter from his book at http://ozanvarol.com.