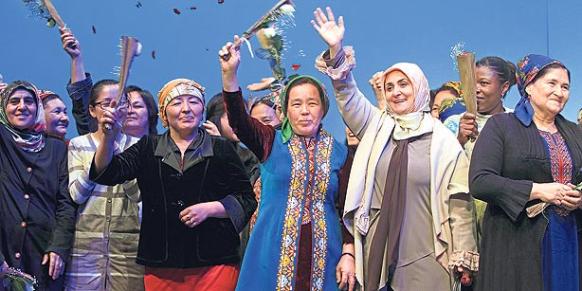 One hundred eighty mothers from 63 countries whose children study in Turkey met for an event in İstanbul on Friday to mark Mother’s Day.

The event, now in its second year and organized by the Baran International Student and Culture Federation, took place at the TİM Show Center. There were moments of both joy and sadness as mothers saw their children for the first time after months of separation.

The students performed plays, sang songs and recited poems during the event, which provided many moving moments for the audience.

Esra Kavurmacı, a businesswoman and head of the event’s organizing committee, said the aim of the program was to reunite mothers and their children who study in Turkey.

“We want to help mothers who have come to our country to also get to know Turkey,” she said.

One of the mothers at the event who introduced herself only by her first name, Melek, said this was the second time she has come to Turkey from her homeland of Kyrgyzstan.

“What I see here is that my son is well taken care of here. Thanks to the Turkish schools, my son learned a foreign language. … Turkish schools introduce Turkish culture to the entire world,” said Meltem, adding that she has another child who she also wants to send to Turkish schools.

Another mother, Vera Stamova from Moldova, expressed similar feelings. “My two children study in Turkey. My younger daughter studied in Turkish schools [in Moldova]. She received a quality education. I love Turkey and I have great confidence in Turkish people. If I had another child, I would also send her to Turkey. I miss them a lot, but they are very lucky and are taken good care of here,” she said.

A student, Astivi Diyalinski, whose mother could not make it to the program, said she has been studying in Turkey for four years, at Marmara University.

“One of my relatives studying at Turkish schools asked me whether I would like to study in Turkey. I said yes. I took an exam and got a place here. It has been a very beneficial experience for me to study in a foreign country. My mother could not take part in the program here, but I feel as if all the mothers here are my mothers,” she said.

Some were given awards at the event. Sevgi Karyağdı, a mother who left for Bashkortostan from Turkey with her family in 1992 to take advantage of educational services there, was given the 2014 International Mothers’ Day Loyalty Award. Karyağdı lost her husband due to an asthma attack and her son due to cancer in her city where temperatures fell as low as minus 50 in winter.

“I would still go there today. For what we see here today, I dreamed for 30 years. I left my country so that my beautiful flowers could be happy in this world and the hereafter,” the woman said as she accepted her award.

Karyağdı said when the organizers of the program asked for a family photo, she could not provide them with one because she never had the chance to get one taken. Yet, she said when she saw the mothers and their children there, she thought there cannot be any better family photo than that.

“Look how beautiful it is to live together with people from different languages and colors. Who has the chance to have such a family? I thank God thousands of times,” she said.

“The Benevolent Mother Award” was given to Günseli Kato, a miniatures artist who contributed to the establishment of a vocational course in Albania for widows. The course was named after Kato.

“The Best Typical Mother Award” was given to Özlem Türkad, who plays the role of a typical Turkish mother in the TV series “Seksenler” (Eighties).

The special award of the night was given to Melek İpek, who is well known for her charity work.

Dates, rice and eggplant moussaka for birthday dinner? It works. A recent birthday of mine happened to coincide with a long-planned Ramadan Interfaith Iftar Dinner co-hosted by Pacifica Institute and Calvary Presbyterian Church in San Francisco. Since I was minimally involved in the planning and execution of the event, and maximally involved in the birthday, […]