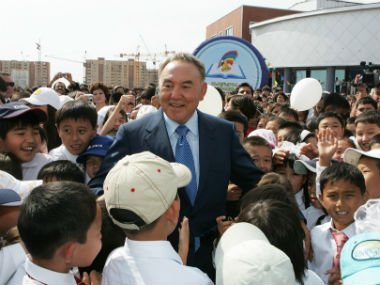 Celik said: “There are already hundreds of Kazakh students in Turkey. They go to Turkish universities and we assist them financially. We awarded 150 scholarships for student coming to Turkey from Kazakhstan next year. There are also Turkish students going to university in Kazakhstan. It is a very positive step that such relationships, especially at university level, have been established between the two countries.” Celik emphasized the contribution of Turkish schools in Kazakhstan to the good relationship between the countries, saying the Kazakhstan Education Foundation (KATEV) has contributed much to the country’s education with the 24 schools it has opened. Celik recalled Nazarbayev’s statement at the opening of Parliament that “Every Kazakh citizen should speak at least three languages,” saying: “I think these schools have reached Nazarbayev’s goal because they teach Turkish, Russian and English at the same time. This is a very important opportunity.” Celik asked students questions in English and Turkish while he toured a high school. He was surprised that students could not name the Turkish President, but all the students knew Ataturk as the founder of Turkey.

Celik told the tale of the Crow and the Fox to the students and listened to a concert, after which the director of Kazakhstan Education Foundation Unal Ozturk presented him with Kazakh National dress and a whip.