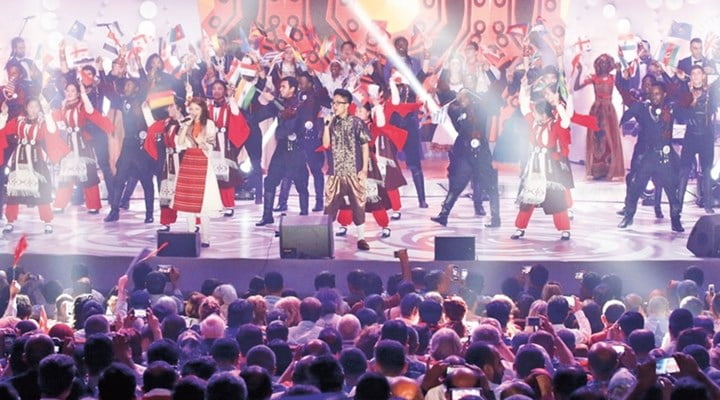 One of the highlights of the evening were Turkish folkloric dances performed by pairs of students from Tanzania-Kyrgyzstan as well as Tanzania-Kazakhstan. A message of solidarity was also voice for Nepal, ravaged by a deadly earthquake on May 15.

The competitors sang the Turkish song “Yeni Bir Dünya”, which means ‘a new world’ in English.

The program drew praise from international prominent figures. Romanian Secretary Culture Alexandru Oprean praised the quality of the competition, stating that it was a better watch compared to the Eurovision contest which aired at the same day. He congratulated the students and the Turkish organizers of the event for sending a worldwide message of peace.

Zoran Panovic lauded the competition unifying different cultures, while Georgian TV producer Tamar Meshki expressed he was in awe of the exceptional performances.

In her remarks following the meeting, Sanchez hailed the schools for their achievements. “I attended the Turkish Language Olympics’ the Philippines finals on Feb. 26. I witnessed your sincerity and efforts there too. You are teaching not only academics but friendship, peace and solidarity as well,” she said

TUSKON, Confederation of Businessmen and Industrialists of Turkey, opens new trade doors with Turkish-Filipino Business Forum in the capital Manila. A delegation of TUSKON businesspeople organized a business trip to the Philippines on January 26-30. As a part of their agenda, the delegation met with the Vice President of Philippines Jejomar Binay at the presidential […]