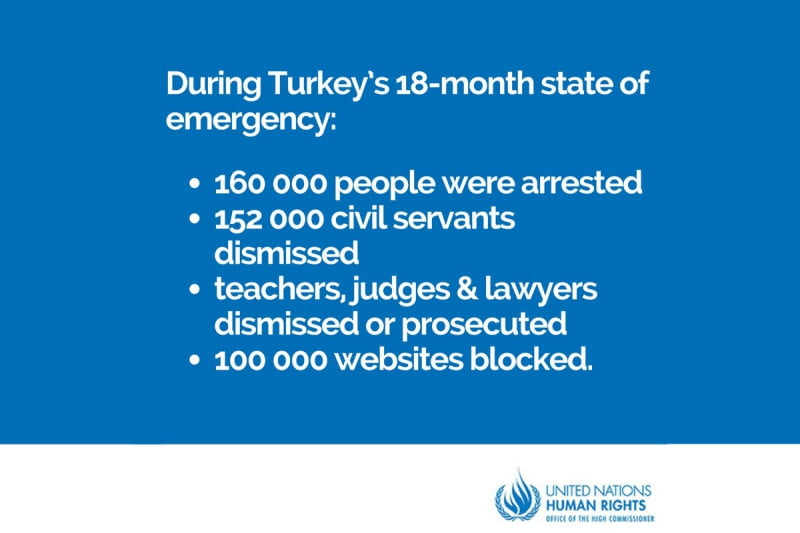 GENEVA (20 March 2018) – Routine extensions of the state of emergency in Turkey have led to profound human rights violations against hundreds of thousands of people – from arbitrary deprivation of the right to work and to freedom of movement, to torture and other ill-treatment, arbitrary detentions and infringements of the rights to freedom of association and expression, according to a report* issued by the UN Human Rights Office on Tuesday.

The report, which covers the period between 1 January and 31 December 2017, warns that the state of emergency has facilitated the deterioration of the human rights situation and the erosion of the rule of law in Turkey, and may “have long-lasting implications on the institutional and socio-economic fabric of Turkey.”

While the UN Human Rights Office recognizes the complex challenges Turkey has faced in addressing the 15 July 2016 attempted coup and a number of terrorist attacks, the report says, “the sheer number, frequency and lack of connection of several [emergency] decrees to any national threat seem to…point to the use of emergency powers to stifle any form of criticism or dissent vis-à-vis the Government.”

One of the most alarming findings of the report “is how Turkish authorities reportedly detained some 100 women who were pregnant or had just given birth, mostly on the grounds that they were ‘associates’ of their husbands, who are suspected of being connected to terrorist organizations. Some were detained with their children and others violently separated from them. This is simply outrageous, utterly cruel, and surely cannot have anything whatsoever to do with making the country safer.”

“One of the most alarming findings of the report,” he added, “is how Turkish authorities reportedly detained some 100 women who were pregnant or had just given birth, mostly on the grounds that they were ‘associates’ of their husbands, who are suspected of being connected to terrorist organizations. Some were detained with their children and others violently separated from them. This is simply outrageous, utterly cruel, and surely cannot have anything whatsoever to do with making the country safer.”

The report cites the April 2017 referendum that extended the President’s executive powers into both the legislature and the judiciary as seriously problematic, resulting in interference with the work of the judiciary and curtailment of parliamentary oversight over the executive branch. Twenty-two emergency decrees were promulgated by the end of 2017 (and two more since the cut-off date of the report), with many regulating matters unrelated to the state of emergency and used to limit various legitimate activities by civil society actors. The decrees also foster impunity, affording immunity to administrative authorities acting within the framework of the decrees, the report notes.

The report contains accounts from several individuals who were dismissed from their jobs for perceived links with Gulenist networks, for using specific messaging applications or through analysis of their social media contacts. “The decrees broadly refer to ‘link or connection’ with ‘terrorist organisations’ without describing the nature of such links, giving large discretion of interpretation to the authorities,” the report states, adding there were serious due process violations. “Many individuals arrested…were not provided with specific evidence against them and were unaware of investigations against them.”

The report also documents the use of torture and ill-treatment in custody, including severe beatings, threats of sexual assault and actual sexual assault, electric shocks and waterboarding by police, gendarmerie, military police and security forces.

Those dismissed from their jobs lost their income, social benefits, medical insurance and even their homes, as various decrees stipulate that public servants “shall be evicted from publicly-owned houses or houses owned by a foundation in which they live within 15 days.”

“Since the stated purpose of the emergency regime was to restore the normal functioning of the democratic institutions, it is unclear how measures such as the eviction of families of civil servants from publicly-owned housing may contribute to this goal,” the report states.

The report also states that about 300 journalists have been arrested on the grounds that their publications contained “apologist sentiments regarding terrorism” or other “verbal act offences” or for “membership” in terrorist organisations.

Over 100,000 websites were reportedly blocked in 2017, including a high number of pro-Kurdish websites and satellite TV channels.

The report stresses that measures restricting rights during a state of emergency must be “limited to the extent strictly required by the exigencies of the situation, meaning they must be proportional and limited to what is necessary, in terms of duration, geographic coverage and material scope.”

The report recommends that Turkey promptly end the state of emergency, restore the normal functioning of its institutions, revise and repeal all legislation that is not compliant with Turkey’s international human rights obligations, including the emergency decrees. It also stresses the need to ensure independent, individualized reviews and compensation for victims of arbitrary detentions and dismissals.

The report also noted continued allegations of human rights violations specific to South-East Turkey, confirming the patterns of violations highlighted in the March 2017 UN Human Rights Office report** on the situation in the region. This included killings, torture, violence against women, the excessive use of force, destruction of housing and cultural heritage, prevention of access to emergency medical care, safe water and livelihoods, and severe restrictions of the right to freedom of expression. Turkey has consistently failed to conduct credible criminal investigations into the civilian deaths that occurred in the context of the 2015-2016 security operations in the South-East, the report states. According to the Ministry of Defence, between July 2015 and June 2017, 10,657 “terrorists were neutralized.” Lack of clarity over the meaning of the word “neutralized” is cause for deep concern, High Commissioner Zeid said, calling on the authorities to provide detailed information about the fate of these individuals.

“I urge the Government of Turkey to ensure that these allegations of serious human rights violations are investigated and the perpetrators are brought to justice,” the High Commissioner said. “I again call on the Government to grant my Office full and unfettered access to be able to directly, independently and objectively assess the human rights situation in the South-East of the country.”

The report is based on information gathered and verified through interviews with 104 victims, witnesses and relatives of victims; analysis of Government information; as well as open source documents, satellite images and audio-visual material, among other relevant and reliable materials. The report is not an exhaustive account of the human rights situation in Turkey, but illustrates patterns of rights violations in the country. The confidentiality of sources is strictly protected, to prevent reprisals.

*The full report can be accessed here