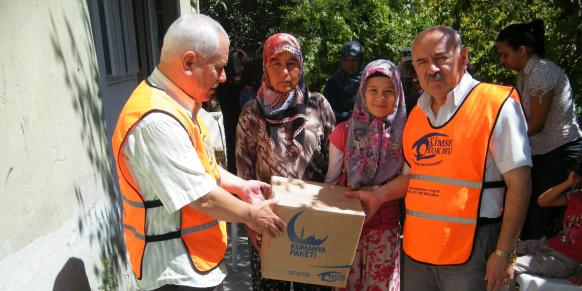 Many business associations, private banks, NGOs and football clubs have launched aid campaigns for families of the victims of the coal mining incident in Soma, where an explosion and fire killed at least 283 mineworkers.
In a press statement on Thursday, Union of Chambers and Commodity Exchanges of Turkey (TOBB) President Rifat Hisarcıklıoğlu said that TOBB has launched an aid campaign for the families of the martyred miners with a donation TL 5 million. Hisarcıklıoğlu also urged the business community take part in this campaign.​“Along with our chambers and exchanges in 81 provinces and 160 counties, we want to support the families of the martyred miners who we consider our charges. With this in mind, we are launching an aid campaign throughout the country. For the first step, we are donating TL 5 million to the campaign. I urge all of businesses to take part in the campaign,” Hisarcıklıoğlu said.

The Professional Hotel Managers’ Association (POYD) also started an aid campaign for the families of miners who died in the accident. POYD President Ali Kızıldağ stressed that with an official writing sent to the hotels the association will ask hotel managers, personnel and customers to contribute this campaign.

The Young Businessmen’s Association of Turkey (TÜGİAD) Head of Ankara branch Türker Naslı announced that TÜGİAD, in a move to show its solidarity with the people of Soma, has launched an education campaign for the children of the mine accident victims.

The İstanbul Chamber of Commerce (İTO) will donate TL 2 million in cash to families of the victims, and it will also provide them with aid in the form of food. The first truck with 500 aid packages will depart on Saturday for Soma, an İTO statement said on Friday.

Similarly, the Ankara Chamber of Commerce stressed in a press release on Friday that it will donate TL 1 million for those who have lost their relatives in the mine accident along with providing scholarships for the victims’ children.

Meanwhile, Turkish Bar Association (TBB) Chairman Metin Feyzioğlu told reporters on Thursday that the TBB will start an aid campaign for the Soma victims’ families. “We have applied to the Ankara Governor’s Office for the required legal permissions. We are starting this campaign for the education of children who lost their fathers in the mine accident,” Feyzioğlu said.

Turkish Islamic lender Bank Asya has announced via Twitter that it will write off all of the individual financial credit and credit card debts of the miners who lost their lives in the mine blast. The bank also stressed that it has deferred individual credits for a year at its Soma branch. Similarly, ING Bank General Manager Pınar Abay said on Twitter that all the credit card debt of the Soma miners who died in the accident will be written off.

Sakarya University Rector Muzaffer Elmas said the university has started a campaign for those who lost their relatives in Soma, and he donated one month of salary to the aid campaign.

İhsan Özçukurlu, chairman of the National Education Foundation (MEV), stressed that the foundation will cover all the boarding school expenses of the Soma victim’s children and it will also give scholarships for university students who lost a parent in the mine blast.

Beşiktaş Municipality in İstanbul announced that it has canceled all festivities for May 19’s Atatürk, Youth and Sports Day. The municipality will donate the money that was budgeted for the May 19 celebrations, about TL 2 million, to the Soma miners’ families.

Meanwhile, Fenerbahçe Football Club will create a scholarship fund for children in Soma to cover their education expenses. The club’s administrative board members will initially cover the education expenses of up to 100 children for five years. The amount allocated for the fund is TL 1.8 million.

Galatasaray has agreed to play a match with Spain’s Atletico Madrid, where former Galatasaray member Arda Turan now plays, for Soma in early August. The income generated from this match will be donated to the Soma victims and their families. Moreover, the Galatasaray football players have agreed to donate their salaries for the match against Kayseri Erciyesspor in the last week of Turkey’s Super League to the victims’ families.

The Beşiktaş football club will also donate the revenue of its match with Gençlerbirliği in the last week of the league to Soma.

Turkish pop singer Demet Akalın and her husband Okan Kurt announced via Twitter that they will send two trucks carrying food to Soma.

Meanwhile, the US, the European Union, France, Poland, Iran, Israel, Greece and the UK have offered their condolences to Turkey.