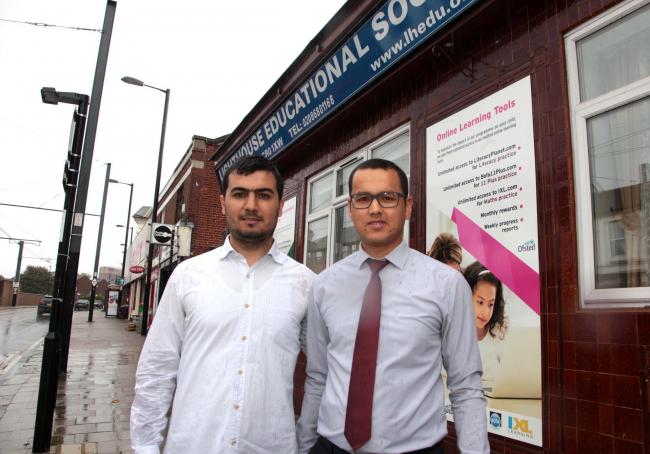 Fatih Deniz and Peter Acmurade of the Lighthouse Education Society.

The streets of Istanbul are a far cry from Croydon, [London, England].

But a crackdown on one Turkish community following the failed military coup in the country earlier this year has had devastating consequences in south London, according to a group of expats.

Some said they felt too afraid to go out in public after their native country’s government branded them terrorists.

Members of the Lighthouse Education Society, an international movement that aims to raise confidence and ability among young people and teach them to respect other cultures, has run a branch in Croydon for six years.

The society is linked to the Gülen movement, denounced as a terrorist organisation by President Recep Tayyip Erdoğan – who claimed it was involved in the July 15 uprising.

Gülenists purged in their thousands were arrested and sacked from state jobs after Mr Erdoğan declared a state of emergency.

Since that day tensions between government supporters and members of the society have continued to rise.

One woman, who lives in Croydon and did not want to be named, told the Croydon Guardian she no longer felt safe and had lost contact with her sister, who believed she was linked to terrorism.

She said: “After what happened in July we cannot walk around safely, I don’t feel I am safe.

“Our life has changed because of what is happening now. Before we were joining in Turkish social groups but now we are divided and we are alone as well.

“So many friends don’t want to speak to us now.

“I called them many times but they don’t answer their telephones; they think we are terrorists, that we are evil. My sister doesn’t speak to me, it is horrible.”

She has lived in Croydon for more than 12 years and said this is the first time she has felt unsafe in the town she calls home.

She expressed concern about sending her 10-year-old daughter to a local private school because she does not want her to be subjected to the same victimisation.

The Gülen movement, named after the US-based Islamic cleric Fethullah Gülen, is accused by the Turkish government of using media and education to spread a seditious message.

After the July coup 21,000 teachers lost their jobs and 17 journalists were arrested.

There are currently 3,000 Turkish people living in Croydon, according to Lighthouse. At its peak, the society’s Croydon centre had 120 children attending classes, but that number has dwindled to less than 50 since 2013.

He said: “They are targeting the grassroots and that is what we are concerned about, especially here in Croydon. Some parents are really worried that if they bring their children someone else will report them and then they will be deported.

“But what we are teaching here is English and maths, we teach them how to be a good citizen and make available for them social activities.”

Propaganda has spread on Turkish media and social media urging people to report anyone linked to the Gülenist movement, according to Fatih Deniz.

Mr Deniz, the community coordinator of Lighthouse in Croydon, moved to the borough a year ago and has been blacklisted by the Turkish government for his involvement in the society.

He said: “They are explicitly naming us as terrorists here in London. It is a lynching campaign.

“When you are reported as a terrorist they can revoke your passport. We try not to look at the news, but people are scared”

The society’s branch in Tamworth Road has stepped up security after a spate of attacks on other centres in London.

Mr Deniz said: “You never know what degree [the tension] will increase and how people will react. The same institutions throughout Europe have been torched and burnt down.

“We have shut and bolted our windows, we never leave a window open here just in case because it would be so easy to get it burned.”