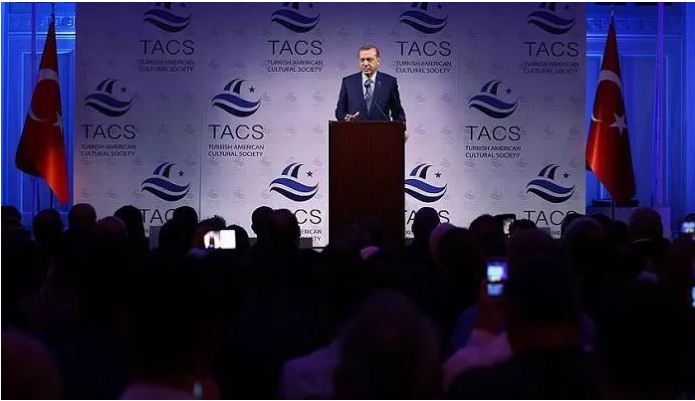 Speaking at a panel discussion sponsored by the Turkish American Cultural Society, Erdoğan targeted the Gülen movement, inspired by the views of US-based Turkish Islamic scholar Fethullah Gülen, whom Erdoğan accuses of masterminding the failed coup.

“Thankfully we secured the power and opportunity to do things that we cannot do in normal times. What happened? We gave them land [for schools] and fields. Why did we gave them those things? We told them to open schools in the country and contribute to the economy,” Erdoğan said.

Admitting that the state of emergency and government decrees were used in order to seize the assets of Gülen sympathizers, Erdoğan added: “Could we have seized them [all the land and schools of the movement] in normal times? No, we couldn’t have. But now, with the help of the KHKs [government decrees] and OHAL (emergency rule), we are gathering all the [Gülen] schools together and are returning them to the state.”

Turkey survived a military coup attempt on July 15 that killed over 240 people and wounded more than a thousand others. Immediately after the putsch, the Justice and Development Party (AKP) government along with President Erdoğan pinned the blame on the Gülen movement.

Despite the fact that Gülen and the movement denied the accusation and called for an international investigation, Erdoğan — calling the coup attempt “a gift from God” — and the government launched a widespread purge aimed at cleansing sympathizers of the movement from within state institutions, dehumanizing its popular figures and putting them in custody.

More than 100,000 people have been purged from state bodies, nearly 44,000 detained and 24,000 arrested since the coup attempt. Arrestees include journalists, judges, prosecutors, police and military officers, academics, governors and even a comedian.

The assets of thousands of businessmen, schools, universities, hospitals, business associations and institutions allegedly linked to the Gülen movement have been seized by the AKP government.

Sadık Çınar* In the last decade, the Hizmet movement has become a phenomenon in Turkish civil and political life. A shallow look from the outside, however, can lead to confusing and contrasting perceptions about the movement when it is only fed by newspaper articles, columnists and rumors. Politicians still think that the only means of political […]