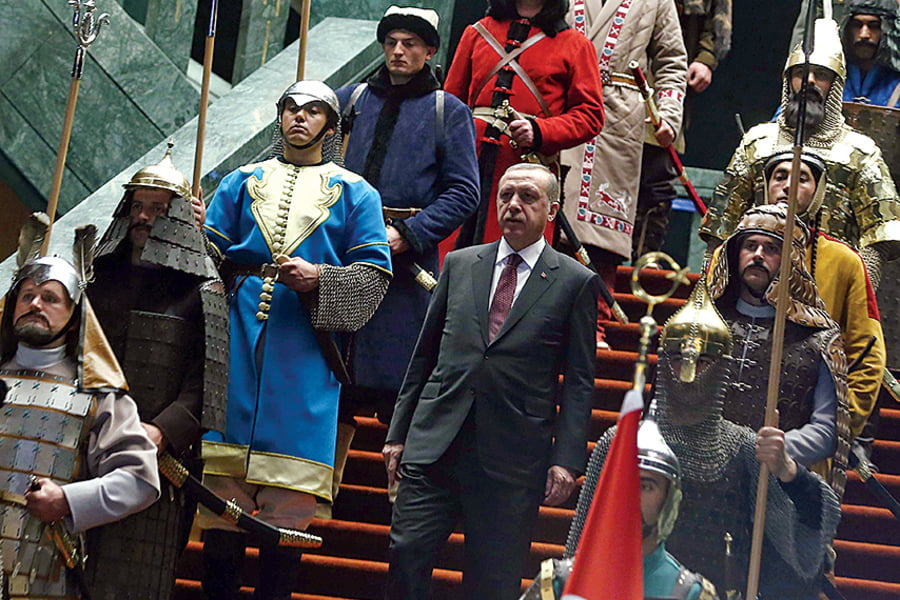 Under Prime Minister Recep Tayyip Erdogan, Turkey’s government is using the Nazi tactic of persecuting the families of people opposed to the regime, writes Abdullah Bozkurt.

I grabbed a hastily thrown together travel bag and rushed to the airport while recalling on the way the terrible saga of my colleagues who were forced to live in self-imposed exile under difficult circumstances. I knew things were bad before as the government jailed journalists and seized a number of media outlets in the past three years. But I was clinging perhaps to a false hope that this backslide on rights and freedoms would make a turn-around and things in my country will eventually improve.

It did not and I was wrong. In fact, it went from bad to worse after the failed military coup attempt which created a pretext for the government to round up journalists en masse in an unprecedented crackdown on the critical, independent, and opposition media in Turkey.

Next day police raided my offices in Ankara and shut down my news service along with other 130 media outlets, including regional and local ones. The number of jailed journalists has quickly climbed to 106, putting Turkey in top position as the worst jailer of journalists in the world. That number did not even include a fresh wave of arrest warrants issued against 35 Turkish journalists.

To understand how Turkey stands in contrast to the rest of the world, one may need to look at several global rankings to understand how badly media freedom has deteriorated in Turkey. According to the New-York based advocacy group the Committee to Protect Journalists, Turkey had 14 journalists in jail as of December 2015, with China (49), Egypt (23) and Iran (19) leading the pack. Today, Turkey has surpassed the combined figure of these three, breaking all-time world records.

In April last year, the Council of Europe, the 47-member intergovernmental organisation that champions the rule of law, fundamental rights and democracy, launched a public platform on its website to document serious cases of media freedom woes. The idea was to support Article 10 of the European Convention on Human Rights that protects freedom of expression in member states and that is binding on all signatory states including Turkey.

Since then, 197 alerts have been posted altogether on the platform with Turkey comprising 75 cases alone.

As part of a transparency drive, Twitter revealed to the public that Turkey alone has comprised more than 50% of removal requests (censorship) for Twitter messages all over the world over the past year.

The question becomes why Erdogan is doing all these nasty things and pushing Turkey into the dark ages by employing outdated apartheid repression tactics against critics and opponents not only in the media, but in all segments of the society. It is quite simple actually.

Erdogan, his family and his associates are terrified of being held accountable for what they have done, from corruption to aiding and abetting the radical groups in Turkey and neighbouring countries. Restoring the rule of law and resurfacing the independent judiciary means he will be dragged to court to respond to these very serious allegations.

For example, Turkey’s corruption probes of December 2013 involved an Iranian money launderer, Reza Zarrab, who is now standing trial in the US District Court in New York, and controversial Saudi businessman Yasin Al-Qadi.

Al-Qadi’s name was once registered as an al-Qaeda financier on the UN sanctions list, and dubbed by the US Treasury as a “specially designated global terrorist”.

Erdogan personally vouched for both these guys, describing them as philanthropists and investors. Corruption has always been a problem in Turkish politics, but this one definitely stood out from the rest of the crowd in terms of the huge amounts of money involved and the shadowy profile of foreigners.

The second and perhaps more troubling worry for Erdogan was the January 2014 revelation of his involvement in arming radical groups in Syria that fight the Bashar al-Assad government. Turkish investigators uncovered a truck full of heavy weaponry en route to Syria, one of some 2 000 that were sent to rebels according to the investigation file. In both cases, Turkey’s critical and independent media have played a significant role in exposing Erdogan’s dirty laundry to the public. But the media is now paying a price for simply doing what the media is supposed to do in the first place as a public interest watchdog.

The embattled Turkish president saw these judicial investigations and the media coverage of that as a threat to his rule. First, he dealt a blow to the independence and effectiveness of the judiciary by effectively taking over the key judicial council Supreme Board of Judges and Prosecutors that decides on promotion, reassignments and disciplinary actions for members of the judiciary. Thousands of judges and prosecutors were reshuffled, purged, arrested and their assets seized by the vindictive Erdogan regime since then.

At the same time, he started pressuring critical media to cease coverage of corruption and other wrongdoings in government, by abusing his authority such as targeted auditing, tax fines, administrative penalties, defamation lawsuits and criminal complaints in 2014. In the second stage, media outlets were seized one after another, making thousands of media workers unemployed last year, and in the first half of this year.

But killing the traditional media outlets by abuse of state power was not enough for Erdogan, as long as journalists keep writing on social media and online news portals with limited resources. Hence, in the third and final stage, journalists themselves were rounded up in big numbers and put behind bars without trial or conviction. The failed coup bid created that opportunity for Erdogan to declare a culling season against independent and critical journalists under emergency rule.

For Erdogan’s survival plan to work smoothly, the role of civil society, important in mobilising masses as well as generating interest for the public, must be discredited. That is why he chose to attack the most powerful civic movement in Turkey, the Hizmet movement, inspired by well-respected Islamic scholar Fethullah Gulen. He scapegoated this 74-year old reclusive cleric who has never shown an interest in politics throughout his life, for the shortcomings in governance. He abused the criminal justice system to falsely label Gulen as a terrorist, without presenting any evidence other than conspiracy theories to support that claim.

According to Turkeypurge.com, an independent portal that tracks dismissals and purges, the government shut down 19 unions, 1 125 associations, 129 foundations, 15 universities, and 1 284 schools owned and operated by civic groups, including the Gulen movement in the aftermath of the failed coup attempt. Nobody understands what these institutions have to do with the military junta that tried to take over government. What is more, 86 000 government employees were sacked and some 20â€‰000 arrested in this massive purge.

The government also issued a new decree dismissing 50 589 civil servants and banned their employment at any state institution.

It is a shame that Erdogan is destroying Turkey’s institutions, doing away with checks and balances, running his own propagandist media machinery to defame critics and opponents, dismantling the secular structure and moving Turkey away from parliamentary democracy.

Those who speak up and resist this dramatic shift have been prosecuted on a regular basis, put behind bars on farcical charges of “attempting to topple the government”, espionage or breaching anti-terror laws.

The abuse of the criminal justice system, especially pre-trial detentions, used as an instrument in Erdogan’s pursuit of a witch-hunt that was designed to create a climate of fear, perpetuate injustices. This is characteristic of the methods used by some former communist regimes in Eastern and Central Europe, and the apartheid regime in South Africa. It also recalls the 1930s Nazi era when Sippenhaft accused family members for the crime allegedly committed by another member, was in practice.

When police raided the home of Bulent Korucu, the editor-in-chief of the Turkish national daily Yarina Bakis last month to arrest him, he was not home. Instead his wife was detained, formally charged and put behind bars. Police also arrested the teacher brother of Bulent Kenes, former editor-in-chief of Today’s Zaman, when the journalist could not be located. There are other examples of how Sippenhaft practice has been exercised by Erdogan’s oppressive regime. In today’s world, the only country that can compete with Turkey in using this old Nazi method is North Korea.

The Erdogan regime must be confronted, put on notice, named and shamed for what it has been doing to its citizenry. It is also targeting expats living in other countries in safety, profiling them, harassing them on foreign soil by breaking the host country’s laws and regulations. It is time to stop the appeasement tactics, often and falsely presented as engagement towards Turkey. It is time to hit Erdogan’s patronage and nomenklatura system with targeted sanctions and even launch a divestment campaign to elicit democratic change in Turkey.