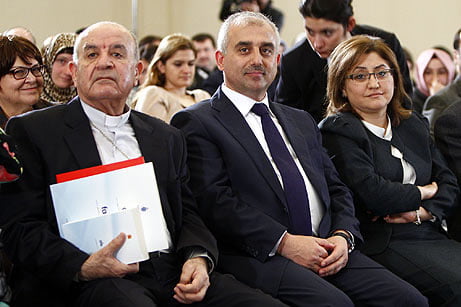 The reasons behind domestic violence and the role of family in the prevalence of violence in society are being discussed during an international conference organized by the Journalists and Writers Foundation‘s (GYV) Women’s Platform in İstanbul.

The conference, titled “Family and Community Violence,” kicked off on Friday night with a reception at the Harbiye Congress Center. The conference will run between Nov. 24 and 26 at the center. Thirty academics from 15 countries are expected to attend the three-day event. Sessions will be held under titles including “Family and Violence: International Perspectives,” “Domestic Violence and its Legal Aspects,” “Violence against Children and its Consequences,” “Family and Violence: Religious Perspectives,” and “Domestic Violence and its Social Aspects.”

During her opening speech, Minister Şahin said “family” and “violence” are two terms that should never be voiced together at all. She also stated that the institution of family is generally associated with love, compassion, respect, confidence and togetherness, adding that it is a great contradiction that violence exists within such an institution.

Stating that people’s awareness of the violence issue should be raised before they marry in order to strengthen the family institution, Minister Şahin said that her ministry has recently launched a pilot scheme for marriage counseling centers that will serve people in the province of Burdur. Noting that divorce numbers have been increasing year by year in Turkey and around the world, Şahin said: “The experts from those centers will meet with couples seeking divorce. The experts will talk with the couples and try to find out which problems are pushing them to divorce. If their problems are solvable, the experts will try to help them solve their problems. If the problems cannot be solved, then the couples will divorce. In Burdur, where the pilot scheme for the project is underway, 25 couples have applied to courts for divorce, but five couples changed their mind thanks to the contributions of experts from marriage counseling centers.”

GYV Chairman Yeşil said during his speech that the international conference will focus mainly on how the ground for violence is laid in the family, and how it spreads to all society. He also stated that academics, representatives from nongovernmental organizations and various intellectuals will try to define reasons behind the prevalence of violence and to determine necessary measures to be taken to prevent violence in the community, primarily in the family.

“An ideal community can be formed with ideal individuals. The first place where a person acquires their personality and values is the family. Think of possible traumas that a child can suffer when he or she experiences violence in her or his family during the period when his or her personality is being developed. Such traumas can cause the person to develop behavior disorders in later periods of life. We should do whatever possible to prevent this; that is why we have gathered here today,” Yeşil said.

Undersecretary Zahteroğulları said that the ministry has prepared comprehensive legislation which aims to prevent violence against women in Turkey and added that prevention of violence against women is not only the responsibility of the ministry, but the responsibility of the society. “This goal cannot be achieved with just the contributions of the ministry, we, the society as a whole, should cooperate to achieve this goal,” Zahteroğulları noted.

Stating that he is very happy to be in Turkey, Professor Laxmi Narsimha Swamy from the Hyderabad-based Osmania University, one of the participators of the conference, told Sunday’s Zaman that in almost every nation, women are subject to domestic violence, particularly because of unemployment and unequal income distribution. “In order to solve these kinds of problems, women must be empowered through providing basic education and skills for gaining employment. The government and other relevant organizations should be involved in developing schemes for providing employment in rural areas to women,” Swamy noted.

Another participator of the conference, Professor Christine Kulke from Berlin University of Technology and Science, told Sunday’s Zaman that violence occurs in various cultures with diverse cultural norms, religions, education systems and socialization practices. “These differences can be found in practice as well as in terms of subject matter in the discourse [on violence]. Violent actions by diverse actors, in the context of family and among individuals, have obviously not been reduced by processes of modernization, civilization and enlightenment. The argument of stronger tendencies of (especially physical) violence in the past and in pre-modern societies turned out as an often repeated stereotype,” she said.

“The complexity of modern societies has a high price, very often the loss of human potential. These processes are described as paradoxes of modernity, which could lead to violent outcomes. So for example [consider] the coincidence of high-tech methods for controlling violence and the high rate of violent acts by prosecuting institutions [using them]. Another example is found in the widespread and extended modern communication system on the one hand and in the psychological situation of intensive social isolation on the other hand,” Kulke added.

She went on to say that in this context, social scientists are seeing the loss of social capacities and qualities of modern societies like a decline in equal distribution of wealth and resources. “In addition the modern society is often characterized by decreasing mechanisms of social integration, especially among minorities.  These processes can lead to social alienation and to disillusioned social expectations as well as to [social] deprivation, or relative deprivation. All these dimensions could be understood as a framework for emerging violent structures and processes,” Kulke noted.

Among the people who will participate in the sessions’ discussions are Dr. Selma Acuner, UN Women Global Civil Society Advisory Board member; Mahinur Ozdemir, an MP in the Belgian parliament; Zyhdi Dervishi, head of the Department of Sociology at the Faculty of Social Sciences of Tirana University; Dr. Renata Pepicelli from the University of Bologna; Dr. Antonio Jorge Pereira Jr., a member of the Sao Paulo Academy of Law (APLJ) and the Sao Paulo Lawyers Institute (IASP); and Professor Hilal Elver from the University of California Santa Barbara.

Many politicians, intellectuals, academics, journalists and representatives from nongovernmental organizations have been invited to the conference. A final declaration of the conference will be released on Monday.