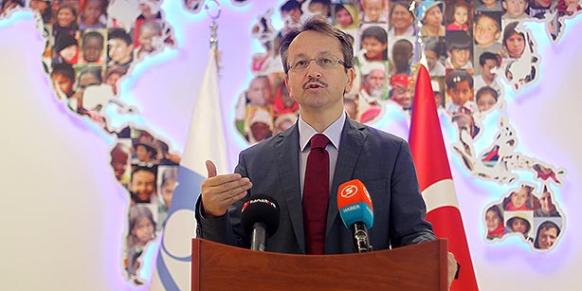 On Monday, the Taraf daily ran a story arguing that the Justice and Development Party (AK Party) government planned to remove Kimse Yok Mu’s public interest status, which would prevent it from collecting donations. The report indicated that the proposal was pending with the Cabinet and it was expected to take effect after being published in the Official Gazette following the Eid al-Adha holiday, which will begin on Saturday.

However, the decision came even before the holiday, when the group might ordinarily expect to collect a considerable amount of donations. İsmail Cingöz, the president of Kimse Yok Mu, announced the Cabinet decision via his official Twitter account on Thursday. Kimse Yok Mu will not be able to collect donations from the public.

Kimse Yok Mu had made an official statement on Monday harshly criticizing the rumored decision, as there are no legal grounds for it. “We do not want to believe that the government would be part of such a plot against our organization,” the group said in its statement.

Prior to issuing this statement, Kimse Yok Mu held a press conference on Monday morning. Kimse Yok Mu Secretary-General Savaş Metin said the government’s goal of removing the association’s status of being in the “public interest” — which allows it to collect funds without receiving permission from the government — is a politically motivated move. The organization is a humanitarian NGO and strictly apolitical.

However, a campaign to smear the organization was launched after the Dec. 17, 2013 government corruption investigation of leading AK Party figures became public. President Recep Tayyip Erdoğan, who was previously prime minister and AK Party chairman, has targeted Kimse Yok Mu, which is affliated with the Hizmet movement due to an apparent government grudge against the grassroots Hizmet movement which it holds responsible for the corruption investigation.

Opposition lashes out at arbitrary decision

Opposition parties in Parliament also reacted to the arbitrary move, which is considered to be part of a government witch hunt against the faith-based Hizmet movement and any institution affiliated with it in response to the corruption scandal that has implicated Erdoğan and his family as well as former ministers and others.

Republican People’s Party (CHP) leader Kemal Kılıçdaroğlu, who spoke to Today’s Zaman, criticized the policy of intimidation used against Kimse Yok Mu, referring to a report prepared by auditors and noting that not a single irregularity was discovered in the activities of the charity organization. He went on to say: “We, as the CHP do not want any charity organization that aids needy people to be punished. If no evidence was found during the investigation of the organization, then prohibiting its activities is not right. Maybe, the minister signed a blank piece of paper without knowing that it had been prepared to stop the organization’s activities. [Deputy Prime Minister and government spokesman Bülent] Arınç should leave his post. Either he signs documents without reading them, or he lies. Who knows how many documents he signed this way? Preventing Kimse Yok Mu from collecting donations just prior to the Eid al-Adha holiday is not appropriate, especially when those who are waiting for aid are considered.”

A report drawn up by the Interior Ministry inspectors in early 2014 indicated that no malpractice was found in the activities of Kimse Yok Mu at the conclusion of the ministry audit.

Evaluating the government ban on Kimse Yok Mu for Today’s Zaman, CHP deputy chairman Mehmet Bekaroğlu said that the decision has two aspects. “First, Arınç rejected the Cabinet decision and said a civil society group’s charitable activities could not be stopped without providing the legal basis for such action. Since it has been revealed that the Cabinet made such decision in opposition to Arınç’s former statements, I feel sorry for him. Secondly, the decision’s anti-democratic feature should be focused on. The activities of any association or charitable organization cannot be barred without reason in presumed democracies. I do not know whether a legal basis was provided in the decision, but it is unacceptable to limit a charitable organization’s activities if there is no legitimate cause,” Bekaroğlu said.

Ruhsar Demirel, a deputy chairwoman of the Nationalist Movement Party (MHP), also criticized the government’s decision to withdraw Kimse Yok Mu’s authority to collect donations, saying: “Given the government spokesman’s [Arınç] announcement early this week saying that ‘no decision has been made about Kimse Yok Mu,’ if it is now revealed that such a decision was already made, then it means that we face a dire situation. If Arınç was correct in his statement, so was the decision not made by the Cabinet? Or, how can Arınç, if he is not aware of what was discussed in the Cabinet, be called the government spokesman?”

Questioning the possibility of a higher authority being involved in the decision about Kimse Yok Mu, Demirel went on: “The source of the decision should be enquired about. How can such arbitrary decisions dominate the state’s mechanisms?

Nurettin Aktaş, a former AK Party deputy, also slammed the government’s move and Arınç’s contradictory statements on the matter, “Once again, Arınç was put in the position of being a lying politician with this recent incident. But the main point is how can a government dare to block a charity that has been extending a hand to needy people for years instead of rewarding it? The prohibition overtly stems from its hostile feelings for the Hizmet movement. No state can be governed with a hostile attitude.”

When rumors that the government was preparing to put a stop to Kimse Yok Mu’s activities circulated in the media earlier, Arınç had ruled it out on Tuesday during a press conference that followed a weekly Cabinet meeting, saying: “Arbitrary action cannot be taken against it [Kimse Yok Mu]. You cannot say that you gave [Kimse Yok Mu] the authority to collect donations yesterday but that you are removing that authority today. There must be legal grounds for this [action]. If this happens, then the administrators of this organization may seek the fulfillment of their legal rights in court against the Cabinet.”

Arınç said there must be the proper legal basis to revoke the public interest status of Kimse Yok Mu, the largest volunteer and global aid organization based in Turkey.

“The decision-making process was not carried out transparently and some officials were tools in conducting this unlawful practice. We have appealed to the Council of State with a request for a suspension of execution. Also, the organization has filed a criminal complaint against Interior Minister Efkan Ala and some ministry officials, as well as against several members of the media for their fabricated reports and defamation campaign against Kimse Yok Mu,” Hazır said.

Hazır also said that the organization had filed a complaint seeking compensation for damages worth TL 1.1 billion.

Kimse Yok Mu operates in 113 countries around the world. Erdoğan and several of his ministers previously participated in many of the organization’s programs and praised its activities. For instance, Erdoğan joined one Kimse Yok Mu campaign to seek a solution to Somalia’s dire drought problem, and said, “Like our ancestors, we will help these needy people.”

Several public figures who previously took part in Kimse Yok Mu’s charitable activities as volunteers have declared support for the organization. Singer Atilla Taş stressed that he had personally witnessed the organization’s humanitarian aid work many times, and director Hamdi Alkan said, “The world is becoming uninhabitable if we prevent charitable movements from working instead of supporting them.”

Poet Yavuz Bülent Bakiler described the Cabinet’s decision as cruelty, and added: “What the organization has faced is totally embarrassing. Mixing politics with such valuable charitable activities is a great shame for our people, our state and for humanity.”

Erdogan also accused the movement of being behind several recent audio recordings posted on various social media networks that disclosed several conversations allegedly between himself and his son Bilal Erdoğan discussing how to get rid of large sums of money cached in their homes and those of their relatives.