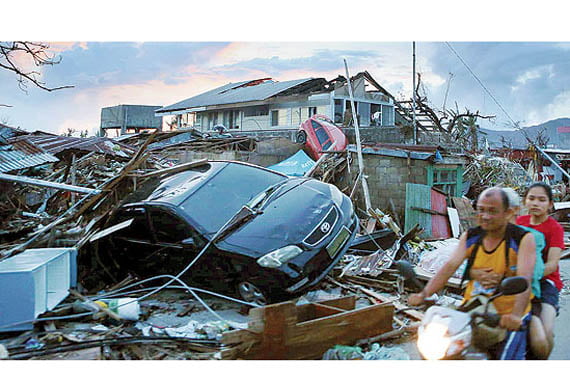 Turkish humanitarian aid association Kimse Yok Mu has announced that it will donate $1 million to the victims of the typhoon-hit Philippines from its emergency funds.

İsmail Cingöz, president of Kimse Yok Mu, told Today’s Zaman on Wednesday: “Our search and rescue team ASYA is in the disaster zone. Our team is working in harmony with aid workers from the UN, the Red Crescent, the Prime Ministry’s Disaster and Emergency Management Directorate [AFAD], the Turkish Cooperation and Development Agency [TİKA] and local officials. We have so far distributed 25 tons of supplies, having made our initial examination of the disaster site. We have now decided to make another $1 million emergency donation.” He said that thanks to the support and donations of the Turkish nation, Kimse Yok Mu will continue to give donations. “We are also working hard to recruit more volunteers for our ASYA team. It is a human duty to extend a helping hand to a nation in a difficult situation. I am calling on everybody to be aware of this disaster.”

The death toll in the Philippines is believed to have exceeded 10,000. The typhoon, with winds raging at 275 kilometers an hour, has left behind scenes one would expect to see in the apocalypse, according to Kimse Yok Mu volunteers.

ASYA team leader İsmail Büyükay, who is currently in the disaster zone, told Today’s Zaman: “The situation is just heartbreaking. There are body bags along the roads. There are looters everywhere. People are foraging through mud and slime to find food. We are one of the few aid groups continuing with relief efforts. We have passed out about 25 tons of supplies, but this is not nearly enough.” Büyükay said food, water, medicine, hygiene products and tents are on the priority list.

Today’s Zaman reporter Mehmet Yaman, who is the Philippine city of Tacloban, said the airport is still open to military cargo planes and helicopters but lies in ruins. He also reported seeing many body bags lined up next to each other on both sides of the roads. “The city smells of dead bodies. Churches and many homes serve as body storage spaces. The flow of international aid isn’t enough to change the current situation,” he said.

The city of Tacloban, population 220,000, is the capital of the Philippine province of Leyte. It is one of the hardest-hit areas in the country. Hunger and a lack of drinking water are already serious problems. Looting is rampant and military and other security units are finding it hard to keep order. The security problem is also slowing down aid efforts, volunteers in the area say.

According to UN data, more than 11 million have been affected by Typhoon Haiyan, and 673,000 people have been left homeless.

TODAY’S ZAMAN, İSTANBUL Tajik President Emomali Rahmon called on Turkish businessmen on Monday to take advantage of Tajikistan’s rich mining resources and to increase economic relations between the two countries. Speaking to participants at the Tajik-Turkish Business Forum organized by the Turkish Confederation of Businessmen and Industrialists (TUSKON) in Konya, Rahmon said his country’s economic […]