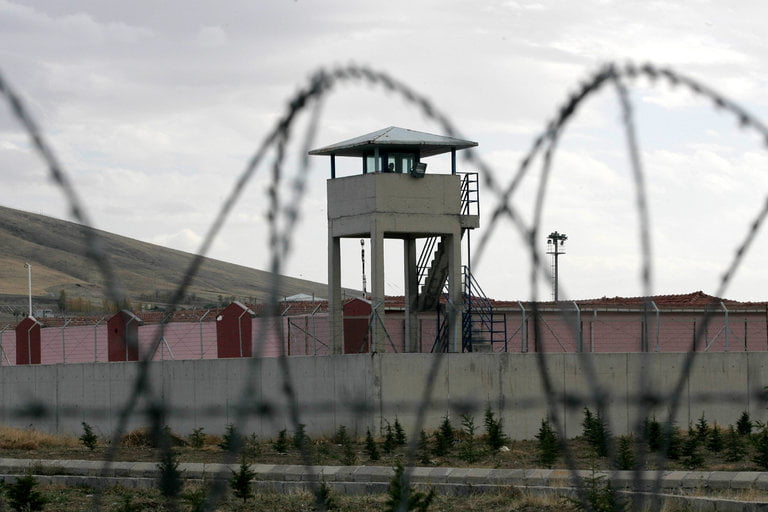 The Sincan prison near Ankara, Turkey, in 2012. The country said in a decree on Wednesday that it would begin releasing up to 38,000 prisoners, or roughly one in five behind bars. Credit Adem Altan/Agence France-Presse — Getty Images

ISTANBUL — Turkey said on Wednesday that it would empty its prisons of tens of thousands of criminals to make room for the wave of journalists, teachers, lawyers and judges rounded up in connection with last month’s failed coup.

The startling decision to put so many criminals convicted of nonviolent offenses back on the streets is a measure of the strains on the state as President Recep Tayyip Erdogan expands a wide-ranging purge of those suspected of being enemies of the government. The efforts have created gaping holes in government institutions, the judiciary, schools, the news media and countless other professions.

Acting under powers granted by a state of emergency and allowing the state to bypass Parliament to enact new laws, Turkey said in a decree issued on Wednesday that it would begin releasing up to 38,000 prisoners, or roughly one in five people behind bars. Most will be freed by the end of the week.

The government has blamed the coup attempt, which unfolded the night of July 15 as a rebel faction of the military sought to topple the government, on Fethullah Gulen, an Islamic cleric who lives in self-exile in rural Pennsylvania and whose followers have long filled positions in state institutions, including the military. But the state has gone well beyond arresting only the military officers suspected of planning the coup attempt.

Prisons filled to capacity in the weeks after the coup attempt, and many detainees slept in the communal spaces of jails, often without any bedding, said Ozturk Turkdogan, the president of the Human Rights Association in Turkey. The authorities have also used sports arenas to house the flood of prisoners.

“This is a serious case of bad treatment, and the prisoners are suffering from serious health concerns as a result,” Mr. Turkdogan said.

More than 40,000 people have been detained or arrested on coup-related charges, officials say. Tens of thousands of others, including teachers, police officers, state bureaucrats and even airline employees, have lost their jobs. In some cases, the state has seized assets without due process, activists say.

“There are a lot of arbitrary practices,” said Andrew Gardner, a researcher on Turkey for Amnesty International.

Under the prisoner-release plan, convicted criminals who have served at least half of their sentences will be freed on supervised parole. The government said that those guilty of murder, rape or other violent crimes were not eligible for release.

“The conditions of prisons were already bad before the coup attempt because they were over capacity,” said Sezgin Tanrikulu, a lawmaker with the main secular opposition group, the Republican People’s Party. Now, he said, “We have heard reports of two to three people sharing beds and having to sleep in corridors.”

Mr. Tanrikulu said his party supported the prisoner-release program as a necessary measure to reduce overcrowding, but he added that it should have been done in consultation with Parliament. “It is not right to use the state of emergency to subvert the rule of law in Turkey,” he said.

Rights activists have raised concerns that the government is making no distinction between those who committed criminal acts to support the coup and people who might only have donated money to charities linked to Mr. Gulen, held accounts at banks affiliated with him or attended schools associated with the cleric.

At the same time, Mr. Erdogan’s government has accelerated an already widespread crackdown on freedom of expression, shutting down more than 100 news outlets suspected of holding links to Mr. Gulen and arresting dozens of journalists.

Since the failed coup, Turkey has once again become the world’s leading jailer of journalists, a position the country held a few years ago, according to Reporters Without Borders, an international advocacy group.

“It’s very unfortunate,” said Orhan Kemal Cengiz, a columnist and human rights lawyer who was detained briefly after the coup attempt, referring to the prisoner releases. He said the government would release “thieves, all the criminals, to fill the prisons with intellectuals, writers, human rights activists and others, as well as the coup people.”

The scale of the purges has raised concern in the West that Turkey is backsliding on human rights, after having shown improvement on that front as it sought membership in the European Union.

Amnesty International recently published a report accusing Turkish security forces of beating and torturing imprisoned coup suspects. Separately, photos of prisoners, many of them bruised or with black eyes, have circulated on social media. Turkish officials have denied all reports of torture or other abuses.

At the same time, Turkey has curtailed the rights of prisoners, raising fears that the purges are being conducted beyond the rule of law, and that the accused will be unable to adequately defend themselves.

A decree issued under the state of emergency restricts visits by lawyers and family members. The state now has the right to record conversations between prisoners and their lawyers, and in some cases government officials are present for those discussions.

“This leads to censorship because people fear repercussions, especially in the cases of reporting torture and mistreatment,” said Mr. Turkdogan, of the Human Rights Association. “They can’t share confidential information about their case. Under these conditions, how can anyone defend themselves? Even those that are guilty have a right to defend themselves.”