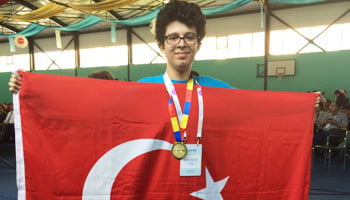 Mustafa Ege Şeker, a student of Yamanlar College in İzmir

Şeker won the gold medal with a project called “heart defense system” – under the category of programming – that aims to determine the age when one is most likely to have a heart attack.

“I aimed to make a project that would help people. I hope I will be able to develop this project and help people more,” Şeker said, speaking to the press about the project.

InfoMatrix, an international computer project competition, born from a desire to bring the world’s best IT students together, was held in Bucharest, Romania, with 500 students from 41 different countries attending it with 285 projects between May 27 and 29. The competition is not just about promoting professional excellence; it also serves to promote intercultural dialogue and cooperation, through the involvement of students and teachers from many different countries.

İzmir’s Yamanlar College was established in 1982 by the volunteers from the Gülen movement — also known as the Hizmet movement — a civil society initiative inspired by the views of Turkish Islamic scholar Fethullah Gülen.