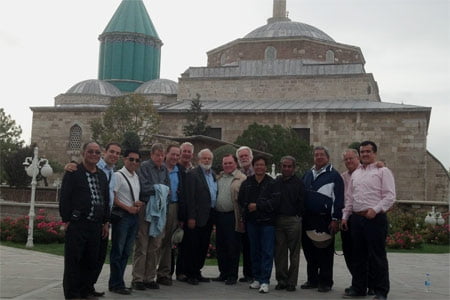 The group is at Rumi’s tomb in Konya

Twelve archdiocesan priests are exploring ancient Christian sites and visiting Catholic faith communities in Turkey this week, as part of a trip organized exclusively for Catholic clergy by an organization of Turkish-American Muslims that promotes intercultural and interreligious awareness.

Father Alexei Smith, archdiocesan director of ecumenical/interreligious affairs, and Msgr. Thomas Welbers, pastor of Good Shepherd Church in Beverly Hills, are co-leading the trip, which is being sponsored and organized by the Pacifica Institute.

Many members of the Pacifica Institute take their inspiration from the Gulen/Hizmet Movement, whose followers have built over 1,000 schools around the world based on the teachings and philosophy of Fethullah Gulen, a Turkish scholar, educator, Muslim scholar and advocate of interreligious tolerance and dialogue.

A Gulen member accompanied the priests on their Oct. 14 flight to Istanbul, and Gulen members are opening their homes to the priests each night for dinner. On the trip, the priests will be able to visit a high school operated by the Gulen Movement in Cappadocia.

“I’m hoping our priests will come away with knowledge and experience of Turkey’s ancient Christian past and its present presence of Catholics — many of whom are Eastern Catholics,” said Father Smith. There are an estimated 35,000 Catholics among 100,000 Christians in Turkey, a country with a 99 percent Muslim population.

“This will be a learning experience for both the priest [participants] and our Muslim contacts,” added Father Smith, pastor of St. Andrew (Russian-Greek) Catholic Church in El Segundo, who has partnered with Gulen members on two previous trips to Turkey.

“I love that they teach an interreligious approach and openness to others,” he said. When visiting Mary’s House on a past trip to the city of Ephesus, Father Smith was asked by local Muslims who frequented the site because of their devotion to Mary to explain the Christian icons hanging in the house.

He expects to have another opportunity on the current trip to talk about Christian icons in the stone churches of Cappadocia, where the group plans to visit the ancient monastery of Goreme and the underground city of Derinkuyu.

“The Pacifica Institute is very open to our having specifically Catholic contacts in Turkey,” commented Msgr. Welbers, who has himself led six three-week pilgrimages to Turkey in recent years and will head up another pilgrimage/retreat to the country next spring.

He noted that the priests’ group is scheduled to meet with the Apostolic Nuncio to Turkmenistan, Archbishop Antonio Lucibello, and with the Turkish Minister of Religious Affairs, Mehmet Gormez, in Ankara on the day they will attend Muslim Friday prayers at the largest mosque in the city, Kocatepe Mosque.

Another highlight of the trip will be a visit to St. Paul’s Church in Konya, where two Italian nuns minister in a priestless parish to Chaldean Catholic Iraqi refugees. Also on the agenda in Konya is a visit to the tomb of Mevlana Rumi, the Sufi mystic who founded the Whirling Dervishes.

“What I’m really looking forward to, and always have on my trips to Turkey, is the interaction of the participants and being part of this group of priests as we are together experiencing a slice of Turkey that most people do not experience,” Msgr. Welbers told The Tidings days before the priests’ Oct. 14 departure.

“It’s a wonderful opportunity to bring Catholic priests and our wonderful Muslim brothers and sisters together,” added Father Smith.

The International Herald Tribune and the New York Times published a story on Fethulah Gulen and the civic society movement he has inpsired, the Hizmet movement. It was the same story with different headlines. It was full of mistakes if not defamation. Below is a detailed analysis of the the news.