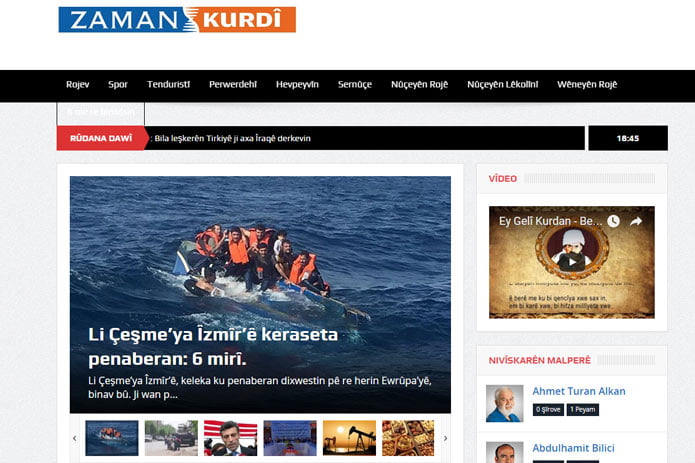 The Kurdish news portal zamankurdi.com, which is expected to contribute to peace in society, democracy and media freedom in Turkey, will start its life on Tuesday.

The Zaman daily will be the first national newspaper to have a Kurdish news portal.

Zaman’s Diyarbakır representative, Aziz İstegün, is the editor of the new publication. Speaking about the launching of the news portal, İstegün says he wants to welcome the new news portal with the Kurdish words “Tu bir xêr hati ZamanKurdi” (Welcome ZamanKurdi).

İstegün says he believes the Kurdish news portal will make a distinguished name for itself with exclusive news articles and interviews.

Describing the novel news portal as the newest member of the Zaman family, İstegün reminded that the Zaman daily is already publishing news in Turkish, English and Arabic. İstegün says zamankurdi.com will cover both domestic and international developments for its readers.

“In addition to developments in all areas, the news portal will provide the Kurdish community with special news reports, analyses, articles and commentary. The website, which will objectively present the country’s agenda to its readers, will also impartially cover developments in the Middle East, including events in the Kurdistan Regional Government (KRG) in Iraq, Syria and Iran,” İstegün said.

İstegün also stressed that the project will be a breath of fresh air to news published in Kurdish globally. Highlighting that 117 years have passed since the first Kurdish newspaper was established, in 1898 by Mikdat Midhat Bedirxan and Abdurrahman Bedirxan in Cairo, İstegün said: “Since then, many newspapers and magazines have been published [in Kurdish]. It is beyond any doubt that all of those were significant. However, the fact that the Zaman daily, with the highest circulation in Turkey, has taken such a step in terms of Kurdish language news media is much more significant.”

The Zaman Media Group also established an online newspaper in Arabic last year. Zaman Arabic was launched on July 14, 2014 in an effort to provide news about Turkey to the Arab world in its own language.