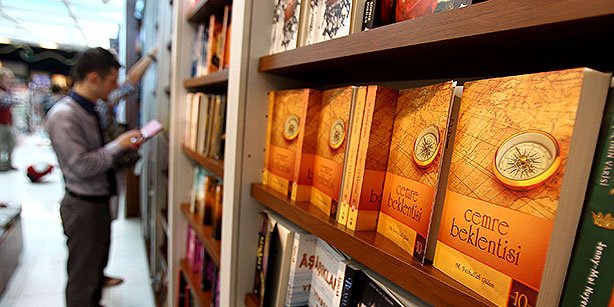 A nationwide bookstore chain, NT is one of the 23 companies operating under the umbrella of Kaynak Holding, which also owns the country’s largest publisher, Kaynak Publishing House.

In the dozens of books Gülen has written, he promotes ideals such as peaceful co-existence with others, interreligious and intercultural dialogue, democratic values, altruism, deepening one’s religious values and the fight against extremism and radicalism.

Particularly after the Sept. 11 attacks in the US, Gülen took a leading role in calling on Muslims to stay away from violence and extremism and remain loyal to the core values and real meaning of Islam.

In an interview with the Zaman daily in 2004, he even said he “hates Osama Bin Laden because he has stained Islam’s luminous face.” Gülen noted that by killing innocent civilians through terrorist acts and violating human rights, bin Laden and his organization, al-Qaeda, caused Islam to be identified with terrorism.

Again, Gülen was among the first to condemn the recent terrorist attacks perpetrated by extremist terrorist organization the Islamic State in Iraq and the Levant (ISIL) in Paris that killed more than 100 people.

In a strongly worded statement, the scholar called on everyone to join in rejecting the terrorism “without ifs and without buts.”

“Once again, I strongly condemn all kinds of terrorist acts that are perpetrated by anyone and for whatever stated reason,” Gülen said, describing the attacks as an “inhuman massacre.”

“Terrorism is the foremost threat to human life, which is the most sacred and most universal value,” the Islamic scholar emphasized, adding that no religion, no idea and no viewpoint can be so corrupt as to approve such acts.

Recalling that Islam attaches the utmost regard to the sanctity of human life and citing the verse of the Quran that states “killing an innocent person unjustly is like killing all of mankind,” Gülen remarked that the protection of human life is one of the fundamental values in Islam.

Despite the clear stance he has taken against terrorism and the lack of even a single piece of evidence to this effect, Gülen and the movement he inspired, the faith-based Gülen or Hizmet movement, have been facing accusations of terrorism in Turkey over the past two years under the Justice and Development Party (AK Party) government.

The AK Party government and then Prime Minister and current President Recep Tayyip Erdoğan launched an all-out war against the Gülen movement following the revelation of a corruption probe in late 2013 in which then-Prime Minister Erdoğan’s close circle was implicated. Erdoğan accuses the movement of masterminding the probe despite a denial from the movement. Since then, individuals and organizations that are thought to be linked with the Gülen movement have been the target of a witch hunt.

The appointment of trustees to Kaynak Holding, which is tied to the movement, and the censorship imposed on Gülen’s books is part of this witch hunt.

In a controversial move, the trustees last week decided to halt the publication and distribution of books by the Kaynak Publishing House, a development that has been described as a blow to freedom of expression and tantamount to forcing the company into bankruptcy.

Since the publication and sale of Gülen’s books, which are read and appreciated around the world in many languages for their promotion of tolerance and intercultural and interreligious dialogue, has been banned by the government-appointed trustees, it is a matter of concern whether the Kaynak Publishing House will be used to print books on political Islam and if Gülen’s books at NT bookstores will be replaced by books that promote political Islam and extremism.