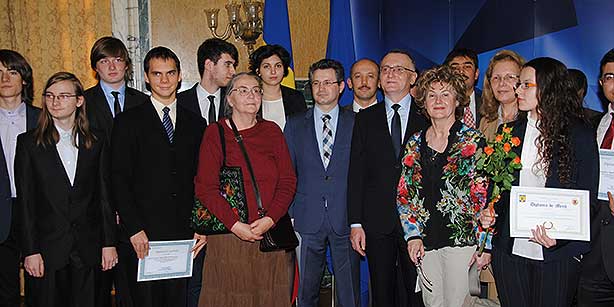 Medal-winning students were given monetary rewards, while teachers were awarded with a certificate of achievement. (Photo: Cihan)

Students received a total of 267 medals representing Romania in international olympiads in 2015, 51 of which were received by 33 Turkish school students.
During the ceremony, medal-winning students were given monetary rewards varying between 500 and 2,000 euros, while teachers were awarded with a certificate of achievement.

Former Education Minister and interim Prime Minister Sorin Cimpeanu congratulated the students and presented awards at the event, which was attended by 225 students and 230 teachers from 99 schools. During his speech, Cimpeanu said: “These students and teachers have honored Romania since the beginning of the year 2015. A total of 225 students have received 276 medals — 51 of which are gold — in that time. I hope that Romania will be as successful in other fields as we have been [in education].”

Emphasizing the importance of the teachers who prepared students for the international olympiads, Cimpeanu added: “I also thank the 250 teachers here who have educated these successful students. Most of those students are from the capital Bucharest. We must aim to spread this success in the capital all over Romania.”

There are currently 10 Turkish schools in Romania, where a total of 3,300 students are educated. Students of these schools have so far received 581 medals in international olympiads. The most recent Turkish school in Romania was opened in September 2015, with former Prime Minister Calin Popescu-Tariceanu, the president of the Romanian Senate, attending as the guest of honor at the inauguration ceremony. “I take pride in unveiling this school [run by the Lumina Educational Institutions chain], which has made a great contribution to our county with its success,” Tariceanu said.