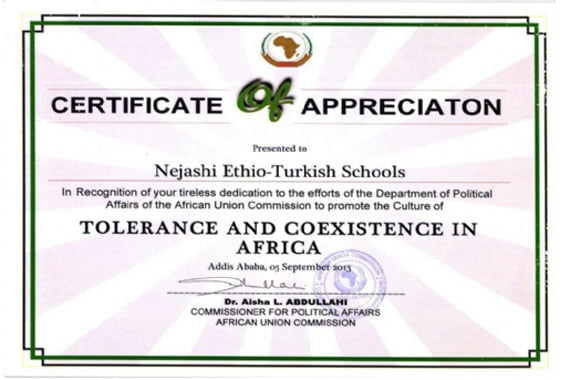 African Union Political Affairs Department has honored Nejashi Ethio-Turkish Schools in Ethiopia with a certificate of appreciation in recognition of their contribution to mutual understanding and peace in Africa.

The Turkish schools in Ethiopia continue to gain recognition with their contributions to science and education. The schools have been recently awarded a certificate of appreciation by African Union Political Affairs Department. Bearing the signature of Political Affairs Department Commissioner Aisha L. Abdullahi, the certificate reads “presented to Nejashi Ethio-Turkish Schools in recognition of their tireless efforts and dedication.”

Having started out with approximately 30 students in 2004, Nejashi Ethio-Turkish Schools today have a population of 535 students from kindergarten to high school. They continue to extend bridges of education and friendship between Turkey and Ethiopia.