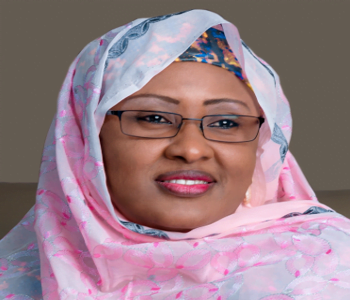 The wife of the President, Aisha Buhari, has described as noble and fascinating the diversity in culture and languages in Nigeria.

She spoke at the International Festival of Language and culture in Abuja organised by the First Surat Group of companies in collaboration with the Federal Capital Territory Administration FCTA.

She was represented by Hajiya Maryam Ibrahim . Mrs Buhari said there was need to preserve and sustain the cultural values of the Yoruba, Hausa Fulani, Ibo, Efik and Nupe

She said: “Today here, we are celebrating the languages we speak and the culture we share as Nigeria is one of the most culturally diverse societies in the world. Language is a means of communication, a vital part of our cultural identity, and a source of sheer pleasure for many who explore its highways and by-ways.

“Therefore, the language we speak reflects who we are, what culture we belong to and the origin we are attached to. To be a happy part of harmonious unity, we need to have the freedom and comfort of showing this cultural heritage to others who are not like us. I happily observe that Nigeria stays to be a rich home for diverse cultures allowing various tribes and traditions to co-exist peaceful. People in Nigeria are proud to be a Yoruba, Igbo, Hausa, Fulani or a member of any other tribes and cultures. This is a cultural richness that many other countries admire and emulate’.

The Chairperson, Surat Group of Companies, Mr. Hikmet Coban, said the Buhari administration is committed to ensuring peace and unity in the country.