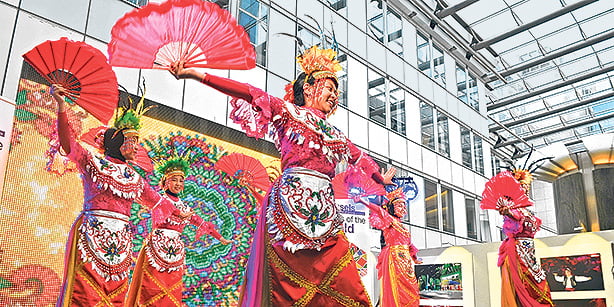 Children from across the world who participated in the 13th International Festival of Language and Culture (IFLC) were welcomed in Brussels. (Photo: Cihan)

In his letter of acceptance to the Belgian-Turkish Friendship Association (BELTUD), which organized the visit to the European Parliament, Shulz said he was pleased to accept the children of the IFLC and have the colors of the world on show. Shulz’s letter to BELTUD head Seval Keyman also noted that the efforts to bring children from different cultures and traditions and allow them to perform to the masses were highly appreciated by the European Parliament.

President Shulz also underlined that the IFLC promotes the European values of dialogue, tolerance, respect for other people and diversity, and living in harmony. The IFLC is a perfect opportunity to develop understanding of each others’ cultures and languages with mutual respect he said.

Consisting of 350 children from a variety of countries across the world, IFLC ‘s different “Colors of the World” show in Brussels will be broadcast live by Belgium’s state channel RTBF and La Trois TV channel on Saturday along with Samanyolu TV, Irmak TV, Mehtap TV and Europe MC. To support the show, #ColorsoftheWorld and #IFLCBrussels hashtags will be created on Twitter during the live broadcast.

The IFLC — a new brand name for what used to be known as the International Turkish Language Olympiads — has already been held in capital cities around the world for two years since the-then Prime Minister and current President Recep Tayyip Erdoğan banned them in Turkey after a corruption investigation implicating members of the government went public on Dec. 17, 2013.

Erdoğan, without any concrete evidence, accuses sympathizers of the faith-based Gülen movement — popularly known as the Hizmet movement — especially those in the police forces and the judiciary, to be behind the graft probe in what he calls an attempt to overthrow the government. Accusations strongly rejected by the movement.

Since then, instead of helping the police and judiciary elucidate the case, Erdoğan has chosen to target anyone associated with the movement, including Turkish schools based abroad, which are the main contributors to the IFLC.

After watching the show, Gabrielle Preuss, a member of the Progressive Alliance of Socialists and Democrats in the European Parliament, said the combination of folkloric dress and modern dance and music impressed her. She added that the music once more showed its power to unite.

Underlining the importance of organizing the IFLC show under the auspices of the European Parliament in Brussels, Turkish Confederation of Businessmen and Industrialists (TUSKON) President Rızanur Meral said he hopes bright and happy days await Turkey after seeing such a successful production. Meral added his belief that the most important investment is the one made in humans, especially youths.

‘IFLC children will bring more and better democracy to the world’

Interacting with the children of the IFLC, Rebecca Harms, the president of the Greens in the European Parliament, said she believes these children will bring more and better democracy to the world. Paying special attention to each visiting child of the IFLC, Harms expressed her gratitude and said that these talented children will occupy important positions in future.

Suggesting sympathy with pluralism and music which is the symbol of peace, Progressive Alliance of Socialists and Democrats President Gianni Pitella noted that no culture or identity is superior to another. Every language and culture is part of the world heritage, he said.

Albanian officials have made it clear that Albania is not planning to act on demands by Turkey’s President for the country to close down the Gulen movement.