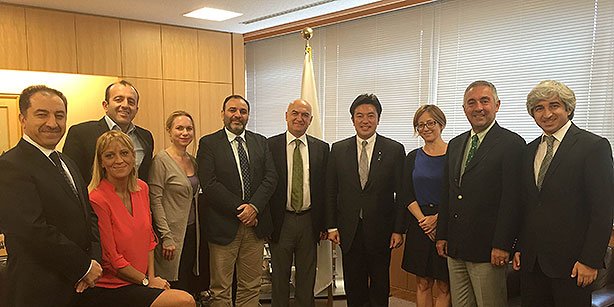 After the forum, the Turkish journalists met with Japanese Foreign Minister Yasuhide Nakayama.

The three-day event was organized by the Medialog Platform, a group run by the Journalists and Writers Foundation (GYV) and the Tokyo-based Turkey-Japan Cultural Dialog Association, and hosted discussions of the pressure placed on journalists who publish news reports that are critical of President Recep Tayyip Erdoğan and the interim Justice and Development Party (AK Party) government. The Japanese journalists all expressed their disapproval of the pressure journalists in Turkey face.

The forum also staged discussions under the themes “Media-politics relations,” “Regional problems and global peace” and “Local issues and their global influences.”

The forum’s discussions were covered by the Kyodo, Mainichi, Yomiuri and Asahi news agencies and the Nikkei daily, in addition to the TBS TV channel. Veteran journalist Ikegami Akira also took part in the event. Evin’s presentation on longstanding oppression of critical media outlets prompted many questions from the Japanese journalists.

In addition to issues surrounding freedom of the press, participants discussed the changing parameters of Turkish foreign policy under the AK Party, its policy on Syria, security threats, the issue of the Syrian refugee influx and terrorism by the terrorist Kurdistan Workers’ Party (PKK) and al-Qaeda terrorism, among other matters.

A number of Japanese journalists said Turkey’s alleged support for the terrorist Islamic State in Iraq and the Levant (ISIL) has been covered by the Japanese media from time to time and they emphasized that Turkey, a member of NATO, should take more concrete steps to remove the perception that there are links between Turkey and ISIL.

Another topic that was discussed in the forum was the renewed outbreak of violence between the Turkish security forces and the PKK and the collapse of the Kurdish settlement process, which was launched in 2012 to solve Turkey’s Kurdish problem by granting socio-cultural rights to the country’s Kurds equal to those of ethnic Turks. In addition, participants discussed the relationship between the massive corruption scandal that came to public attention on Dec. 17, 2013 and the deteriorating situation of the principle of the rule of law.

The “parallel state” or “parallel structure” is a term invented by Erdoğan to defame and criminalize the Gülen movement, also known as the Hizmet movement, which is inspired by Turkish Islamic scholar Fethullah Gülen. Erdoğan accuses the movement of being behind the revelations of corruption that have implicated Erdoğan’s family and of plotting to stage a coup against him and the AK Party government.