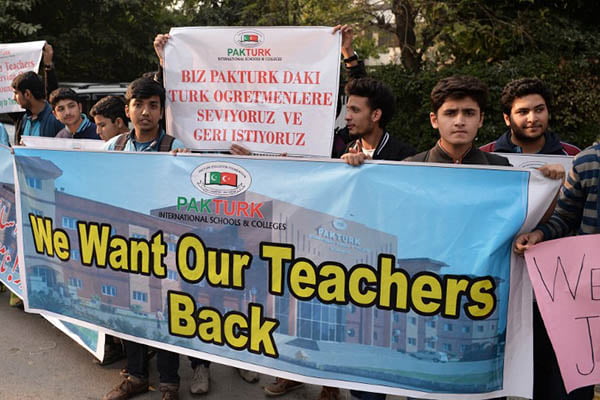 The act of sending to Turkey over 400 Turkish citizens working and studying in the Pak-Turk International School system is highly condemnable. They have been living in Pakistan since 1995 and this is their home now. Their kids were born and brought up in Pakistan. It is heart-wrenching to see that they are suddenly being treated like terrorists. They were given the ultimatum of leaving the country or they, along with their families, would be arrested. They are highly professional and trained teachers. They are people like us who have families, jobs, and homes right here. They served Pakistan for 21 years and now, and all of a sudden their intentions are being doubted.

Pak-Turk Schools are one of the best institutions I have ever seen. My niece and nephews study there and I personally know the Turkish teachers. They are highly cooperative, humble, sincere and down to earth people. They have done more good for our country and for our kids than many others. Under all the harsh circumstances within the country, they have lived and served us. The Turkish staff always shares its experiences and positive aspects of their culture with kids. They boost the students’ level of confidence.

We have never witnessed anything dubious at these schools. It is among the best institutions I have seen. They provide quality education and generous scholarships and unlike other Pakistani school systems, they do not promote the Western or dating culture. They promote our culture among our kids. My eight-year-old niece is well aware of Urdu poets and their contributions to literature.

The staff has requested the government to grant them permission to stay till March 2017 — until the session ends — so their children’s education does not suffer due to politics. Why can’t we separate politics from education? This is emotional and psychological trauma to the Turkish families and our kids. Children are asking weird questions like why their dear classmates are leaving and what they have done. They say the staff and classmates have been kind and sweet to them. Who is going to answer my niece?

I request Mr Recep Tayyip Erdogan and Prime Minister Nawaz Sharif to please revoke these orders and let these self-sacrificing people stay, who are here to serve humanity. After years of service, this is the treatment they are getting from us. This decision by the government is more like a monarchy and less like a democracy.

The network of [Pak-Turk] of schools came under the media scanner last month, after the Turkish government demanded that Pakistan close down the entire network following the failed army coup to overthrow Turkish President Erdogan. Since then, Erdogan has ordered a ruthless purge and arrest of anyone even suspected of having links with his political rival, Fethullah Gülen, whom Erdogan holds responsible for the coup attempt.

One of the brothers of Turkish Islamic cleric Fethullah Gülen, Kutbettin Gülen, 70 years old, who was arrested in October, is being deprived of his prescribed medication despite suffering from heart disease and high blood pressure, according to the tr724 news website.