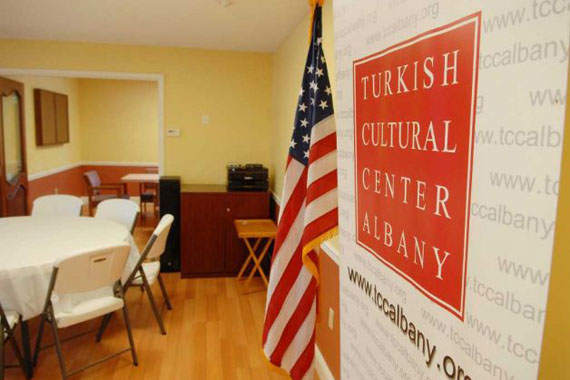 This is the main hall in the newly opened Turkish Cultural Center. (Paul Buckowski / Times Union)

MENANDS — The Turks are rising in the Capital Region.

In the past six months, Turks have bought a building on Broadway in Menands, renovated it and created the Turkish Cultural Center of Albany with the help of the organization’s first paid full-time employee.

Once limited mostly to a few graduate students from Turkey in the 1980s, an estimated 200 Turkish families now live in this region and work as professors, researchers and pizza shop owners.

One of their members owns Ali Baba restaurant in Troy, which supplies Turkish specialties to dinners at the center, including gatherings each weekend to break the fast during the Islamic holy month of Ramadan, which ends Sept. 10.

A core group of a few dozen families started the cultural center because the local Turkish population had reached a critical mass that could support it. Also, several Turkish couples had babies in the past year and they were confronted with an age-old conundrum of immigrants: how to assimilate into American society without losing their own cultural identity.

After a year of fund-raising, the not-for-profit organization made a down payment on the $250,000 two-story structure on a commercial and industrial stretch in Menands. The organization turned an empty office building into a multi-use facility with classrooms, an after-school play area, game room, dining hall and conference room. The center is decorated with Turkish coffee pots, glassware, paintings and handicrafts. The distinctive red Turkish flag, with a white star and crescent moon, stands next to an American flag.

There is no mosque on the site and the center will not be used for Islamic prayer services, organizers said. Turkey is a Muslim country, with Christians, Jews and non-Muslims making up less than 1 percent of the 78 million people in the republic. Yet the president of the local organization took care to explain that the Turkish Cultural Center of Albany is not a religious or political group. In keeping with Islamic teaching, the center will not serve alcohol or allow smoking, but women, children and people of all faiths will be welcome to participate. There will be no dress code. Cultural dinners, interfaith programs and classes in Turkish cooking will be open to the public.

“We can serve as a bridge between East and West,” said Veysel Ucan, executive director of the center, who hopes his efforts will help dispel misunderstandings about Turkey.

“Our goal is to help our children preserve their cultural identity and to introduce our culture to the people of the Capital Region,” said Ali Can, president of the organization. “We want to be integrated into the community and to learn alongside each other. We don’t want to consume our energy on controversial issues.”

Neither man wanted to get into a debate about the hot-button issue of an Islamic center and mosque proposed to be built two blocks from ground zero in Lower Manhattan.

“I don’t think it’s necessary to have a mosque there. It could be just a cultural center,” said Ucan, 31, who came to the U.S. in 2001 and earned a master’s degree in computer engineering at Manhattan College. He worked at the Turkish Cultural Center in New York City before being hired in Albany last August. He and his wife, Ozgul, have a 2-year-old daughter, Fatma, and live in Troy.

“I hope people learn to separate Muslims from terrorists,” Ucan said. “A true Muslim cannot be a terrorist. Most of our American friends understand that difference, hopefully.”

Can hopes that visitors to the Turkish Cultural Center of Albany will come to appreciate both the ancient history of the Ottoman Empire and the triumphs of modern Turkey, which boasts one of the fastest-growing economies in the world and is making a bid to become a full member of the European Union.

“We’re trying to educate people about the diversity and tolerance in Turkey today,” said Can, 39, a researcher at GE Global Research in Niskayuna who earned a Ph.D. in computer engineering at Rensselaer Polytechnic Institute. He and his wife, Bouchra, have a 1-year-old daughter, Farah, and they live in Troy.

Neither Can nor Ucan wanted to engage in a discussion of sensitive and controversial issues pertaining to Turkey. Those include the Armenian genocide of 1915, which included the massacre and forced deportation of more than 1 million Armenians living in Turkey. There is also a violent history with ethnic Kurds living in Turkey and Turkey’s strained relationship with Israel.

“We don’t want to get into arguments over those matters,” Ucan said. “I can’t stress enough that we’re not a political or a religious organization. Our focus is strictly cultural. We want to promote understanding of Turkish culture. The Capital Region has given us many opportunities. Now, it’s time for us to give something back.”

For more information about the Turkish Cultural Center of Albany and to learn about upcoming events, go to their website at http://www.tccalbany.org.