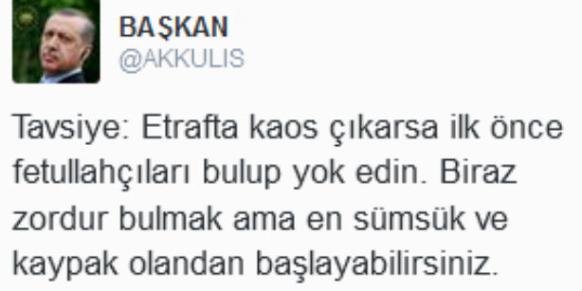 “A piece of advice: If chaos breaks out, find Fethullahçıs first and wipe them out. It would be a bit difficult to find them, but you could start with the one who is the most sluggish and unreliable,” troll account @AKKULIS tweeted on Thursday.

“A piece of advice: If chaos breaks out, find Fethullahçıs [members of the Gülen movement] first and wipe them out. It would be a bit difficult to find them, but you could start with the one who is the most sluggish and unreliable,” troll account @akkulis tweeted on Thursday. “Fethullahçı” is a derogatory term used for sympathizers of the Gülen movement, which is inspired by Turkish Islamic scholar Fethullah Gülen.

The @AKKULIS account has been among the dozens of notorious troll accounts that attack President Recep Tayyip Erdoğan’s critics and opponents, including some of the ruling AK Party’s deputies and Cabinet members who do not stay in line with Erdoğan.

Another pro-government social media troll account that goes by the name Esat Ç. was also shut down.

This week, there was an incident at an AK Party office in İstanbul’s Kartal district in which an armed man smashed windows on the top floor of the building and hung a Turkish flag with a Zülfikar, a stylized representation of the sword of Ali that is used as an Alevi symbol. The man was detained by police.

Following this, an AK Party troll using an account called “Kuşçubaşı Eşref” posted a tweet describing the incident as the beginning of an Alevi uprising which he had talked about a month ago, mentioning that the flag had the Zülfikar image.

In a similar vein, pro-government account @YesilOperasyon recently posted a tweet aiming to instigate an Alevi-Sunni conflict, writing: “We now understand Yavuz Sultan Selim [an Ottoman Sultan that defeated Iranian Shah Ismael in a battle and engaged in disputable acts against Alevis] better. Without their [Alevis] being wiped out totally, there will be no peace in the country.”

Many criminal complaints filled against those accounts are currently waiting to be investigated. Due to the recent legislation adopted in Turkey against hate crimes, the prosecutor may seek sentences of two to five years for the Twitter trolls mentioned above.

Trolls also carried out a smear campaign against former President Abdullah Gül on Twitter. The trolls intensified their attacks when Gül announced that he would return to the AK Party and signaled that he may take over the leadership of the party and of the government.

Varank is reportedly in charge of fake Twitter accounts that are manned by thousands of users hired by the ruling AK Party to advance any campaign that benefits Erdoğan over social media.