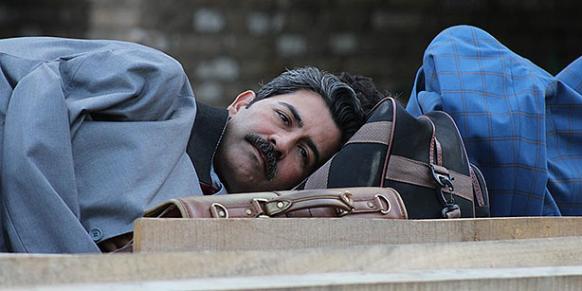 A scene from the Turkish film "Selam: Bahara Yolculuk." The drama opened in cinemas on March 13.

The 2013 Turkish movie “selam” (Greeting) told the stories of volunteers who embraced humanity outside Turkey’s borders; it was a movie that was appreciated not for its cinematic qualities, but for the sake of the beloved memories of those pioneers who went to territories they knew very little about to open charter schools in those lands.

“Selam: Bahara Yolculuk” (Journey to Spring), which opened in Turkish cinemas on March 13, is the follow-up to that film and it takes viewers back to the beginning of the story, the telling of which was actually a bit fragmented in the first film.

The new film opens with a sequence showing how the seeds of the overseas charter schools affiliated with the Gülen movement — which now exist in 160 territories across the globe — were first sown 25 years ago during a gathering in İstanbul’s Altunizade neighborhood. Volunteers are drawing country names from a cone to determine where they will go to start the schools, and the countries written on some of the slips of paper are places they didn’t even know existed.

Based on true stories, the film focuses on the story of İsmail, one altruistic teacher among the many who were present at that gathering.

İsmail is headed to Kyrgyzstan; he packs his things in a few days and says goodbye to his family. Aboard the flight to Kyrgyzstan, he meets a man named Mehmet, who will turn into a most unexpected ally on his adventure in Kyrgyzstan. Mehmet is a businessman running away from troubles he is facing in Turkey; he needs to disappear for a while until the dust settles. Soon he finds himself helping İsmail in his efforts to start a Turkish school: The two obtain permission from the Kyrgyz education ministry and find a rundown building near the Lake Issyk-Kul. They have only three months to turn this dilapidated building into a decent school, but an influential man called Taştan has other plans for the building. The Kyrgyz authorities’ decision to green-light the school is a blow to Taştan’s plans, so he will try everything he can to prevent İsmail from opening the school.

“Selam: Bahara Yolculuk” offers better production, directing, acting and a better screenplay than the first film, all of which help make up for the messiness of that first film.

Written by Erkan Çıplak, the script is a leap in the right direction, for it turns the lens on how the story of the Turkish schools abroad began. The camera takes the viewers to the fifth story of a building in Altunizade — even to the room of Turkish Islamic scholar Fethullah Gülen, who inspired the Gülen movement — to offer a moving scene about the motivations of the self-sacrificing teachers who opened the first Turkish schools abroad. It seeks to find the answer to the question, “Why are you doing this?” — an inquiry frequently directed to İsmail, sometimes in distrust, by both the local people and by Mehmet, throughout the film. “Why are you here?” “Why would you travel all this distance if you don’t have a personal gain?”

It’s true that those people whose stories have now turned into legends within the movement were not received on red carpets in those countries at first, and the film’s screenplay manages to underline this fact realistically, while also highlighting the emotional aspects of the story. Another strong suit of the screenplay is that instead of romanticizing the tale, it strives to depict events and characters as realistically as it can; elements of the true story that might be regarded as “mystical” cinematically have been reduced to minimum.

The character Mehmet; the relationship between İsmail, his wife, and their son; the character Taştan, and the local people’s reservations, all contribute to the story’s authenticity. The film’s makers have successfully avoided repeating the previous film’s mistake — which was making “self-sacrifice” the central concept of the story. In this film, the central concept is the founding of a school, whereas self-sacrifice is an attribute of some of the characters.

Technically speaking, Hamdi Alkan’s directorial style reminds one of Mahsun Kırmızıgül’s approach. Visually, the film offers numerous well-shot scenes, but it’s hard to say that these instances help the narrative. Although there are several continuity errors and problems regarding the dissolve between scenes, a good screenplay and good acting are the film’s strong suits. Gürol Güngör’s balanced performance and his screen chemistry with Mert Yavuzcan are particularly noteworthy.

Having earlier delivered Turkey’s relief aid to the Filipino flood victims, Kimse Yok Mu Foundation now gears up for a polyclinic and an orphanage as a part of its permanent aid initiatives in the region.