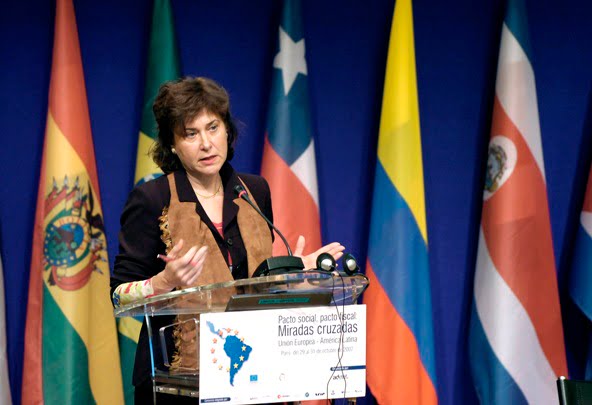 Turkey should deal with its problems within the confines of the rule of law and the legal instruments of democratic societies, Alexandra Cas Granje, European Commission (EC) director of enlargement, has said in reference to a recent corruption scandal and draft bill on the Supreme Board of Judges and Prosecutors (HSYK), stressing that the EC expects candidate countries not to use shortcuts outside of the rule of law.

Speaking at a panel session in Brussels on the developments that have recently shaken Turkey, Cas Granje stated that the corruption allegations that broke a month ago, the government’s claims about a state within the state and the subsequent government response to these events threaten the judicial paradigm in Turkey. Her remarks were the first official EC statement after Prime Minister Recep Tayyip Erdoğan’s visit to Brussels last week.

“We expect candidate countries to address these/any issues within the limits of the rule of law. There can be no short-cuts outside rule of law, because no-one in a democracy is above the law,” Cas Granje said, stressing that Turkey may have problems, but its response to these should be in accordance with the rule of law.

On the allegations of corruption, she said that Turkey must address these allegations without discrimination, in a transparent and impartial manner, referring to the Turkish government’s transferral of scores of prosecutors and hundreds of police officers, including some who were working on the corruption investigation.

The corruption investigation became public on Dec. 17, 2013, following a wave of detentions, including three ministers’ sons. Thousands of police officers and scores of prosecutors have been removed from their posts since the scandal became public.

“We underline the importance for the government to let democratic institutions do their work and not to undermine their resilience through the introduction of legislation retrospectively changing the existing one,” she said, adding, “If there really is a criminal organisation aspiring to undermine the state, let the right instances deal with this, in full respect of the basic principles of rule of law, including independence of the judiciary.”

The government insists that the probe is part of a conspiracy orchestrated by what Erdoğan calls the “parallel state” and its foreign collaborators. According to the prime minister, this “parallel state” is made up of members of the police and judiciary linked to the Hizmet movement, led by Turkish Islamic scholar Fethullah Gülen.

She said Turkey’s judiciary had been through many reforms since the constitutional amendments made in 2010 that and one of the most valuable ones was the law on the HSYK, the body in charge of appointing senior judges and prosecutors.

Cas Granje noted that the EC had examined the amendments in the controversial draft bill to restructure the HSYK, saying that they raise serious concerns in terms of the separation of powers, democratic checks and balances and the rule of law.