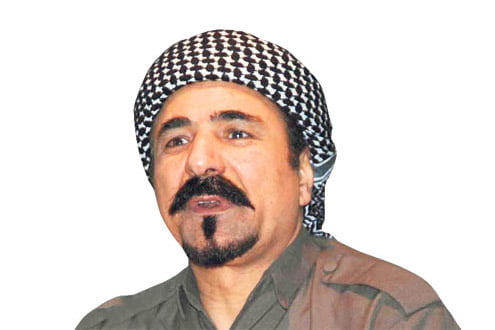 Renowned Kurdish singer Şivan Perwer has voiced his support to the ongoing peace talks between the Justice and Development Party (AK Party) government and the terrorist Kurdistan Workers’ Party (PKK) to resolve Turkey’s long-standing Kurdish problem and urged that freedom should be taken through peaceful means.

In an exclusive with Sunday’s Zaman from Arbil, Perwer said: “Kurds are knowledgeable and aware. They are now well informed on issues related to science, literature, technology and the media. They don’t bow their heads and they want their freedom. Kurds should not take their freedom in exchange for blood. I want them to get back their freedom through friendship and brotherhood. Kurds want to establish a strong Turkey along with Turks. They want to establish a Turkey that respects diversity.”

The self-exiled Perwer, who left Turkey in the mid-1970s to evade a court case, has been living in Germany and refuses to return to Turkey.

The Kurdish singer said he finds the peace talks very significant as long as both the state and the PKK are sincere about it.

Early this year, the Turkish government announced that it was conducting talks with the jailed leader of the PKK, Abdullah Öcalan, to broker a deal to disarm the terrorist group. The PKK leader was captured in 1999 and has since been imprisoned on İmralı Island off the coast of İstanbul in the Sea of Marmara. National Intelligence Organization (MİT) Undersecretary Hakan Fidan has been meeting with Öcalan as part of the talks for some time.

According to Perwer, the state should not label everyone “terrorists” and not avoid sitting around a negotiating table with the PKK.

“The state should sit and talk to people like me, [jailed PKK leader] Abdullah Öcalan, [PKK operative] Murat Karayılan, [Kurdish intellectuals] Kemal Burkay and İbrahim Güçlü. They should say, ‘No soldiers or guerrillas [referring to members of the PKK] should be killed from now on’,” Perwer told Sunday’s Zaman. Regarding his suggestions for the PKK during the peace process, he said the PKK needs to be softer. “I think the PKK supports this process. I talked to a few people from the PKK. They find the process a good one. They say, ‘If the state has goodwill, we are ready to support this process’,” the Kurdish singer said.

Responding to a question about Islamic scholar Fethullah Gülen’s support for the peace process, Perwer said he finds Gülen’s messages very important and he thinks Gülen’s involvement in the process is of utmost importance because he is an influential figure. In a message he released in early January, Gülen said every necessary step needs to be taken, even if some of these steps might seem unnerving at first, to maintain peace in the country.

In his latest weekly speech, broadcast on website Herkul.org, Gülen called for necessary steps for peace as long as national dignity and pride are not undermined because “there are benefits in peace.”

The Islamic scholar recalled that the Treaty of Hudaybiyyah, which took place between Muslims and non-Muslims in the early days of Islam and established a 10-year peace in Mecca and Medina, included some articles that were very difficult for Muslims to accept at first but later turned out to be to their benefit. Perwer said: “I hope people understood what he [Gülen] meant. He is offering services on a large scale for the nation’s literature, culture and religions. Schools [established by his followers] are very influential around the world. It is very necessary for Gülen to be involved in the solution of the Kurdish problem. The movement he inspired today has Kurdish TV and radio. They have publications in Kurdish. These are important steps. These are services made without having any political expectations.”

The Kurdish singer also called on Gülen to spend more time on the solution of the Kurdish problem because Turkey gives importance to his remarks and he has a large support base.

“If he is involved in this process, peace will come. Real peace comes from those who have a real conscience. He is a good thinker and has a conscience. He could be the voice of the conscience of the Muslims,” Perwer added.

When asked about his views concerning the killing of three PKK women, including PKK co-founder Sakine Cansız, in Paris in early January, Perwer said he used to know Cansız well and he thinks the murders might have been masterminded by the deep state of Turkey, Iran, Syria or Russia or by an international mafia. “I used to know Sakine very closely. There were many times we sat together and talked. She was a precious woman. She became like the mother of Kurds. She was described as ‘Rosa Luxemburg’ of the Kurds. This is correct. She was jailed, she was tortured, but she always held on to her ideals. She always worked for Kurds,” he said.

With regards to his earlier remarks that if he returns to Turkey one day he will give concerts in every part of the country, Perwer said he plans to give a concert in every province of Turkey if he returns.