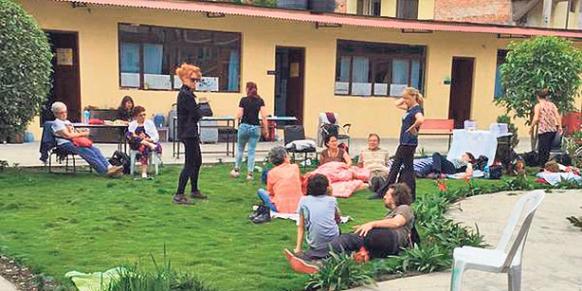 The Meridian International School in the Nepali capital of Kathmandu has opened up its premises to locals after the city was hit by a powerful earthquake on Saturday. (Photo: Cihan)

The Meridian International School in the Nepali capital of Kathmandu, founded by Turkish businessmen and educators in 2002, has opened up its premises to locals after the city was hit by a powerful earthquake on Saturday that killed thousands, with several thousand others injured and seeking medical treatment and help.

Thousands of Nepalese began fleeing Kathmandu on Monday seeking safer shelter because of powerful aftershocks and looming shortages of food and water after the 7.9 magnitude earthquake on Saturday that killed more than 3,700 people and left over 7,000 injured.

Halil Çınar, the director of the Meridian International School, said they had opened up the garden of their school for locals and tourists and provided them with food, blankets and a place to sleep. Çınar said the Turkish teachers working in the school and their families are fine and are working to help those affected by the earthquake.

“We are not planning to return to Turkey at the moment and will resume our classes as soon as the situation improves,” Çınar added. He added that they have minor cracks on the walls of their school and their houses but are staying in the school premises because of the aftershocks.

Stating that school teachers are distributing food aid to nearby villages around Kathmandu, Çınar also noted that they had walked along streets with Turkish flags to determine if there was any Turkish national in need of assistance in Kathmandu. “There are continuous power cuts in Nepal, as a result of which the Internet and mobile phones are not working. So we are telling our close ones not to worry,” Çınar noted.

Tourists Levent and İzber Barın, who were in Kathmandu during the earthquake and returned to İstanbul on Monday, were among those who sought refuge in Meridian International School. Levent Barın said when they were helpless after the earthquake, people directed them to the Turkish school as a place of shelter. “We had three meals a day and were given blankets. The Turkish teachers also stayed with people in the school,” İzber Barın said.

The fully equipped team will both contribute to search and rescue activities and provide humanitarian aid in the region for at least 10 days. A team of paramedics and psychologists will later follow the group.

Kimse Yok Mu Chairman İsmail Cingöz announced in a Twitter post on Sunday that the organization will spend TL 100,000 in donations to buy medical supplies and food to help the victims of the disaster.

In a written statement on Tuesday, Kimse Yok Mu Vice Chairman Levent Eyüboğlu said the team has already started distributing 25 tons of basic food items in Kathmandu worth $50,000. Eyüboğlu also announced that total aid for the Nepali earthquake will reach $1 million and the number of Asian Search and Rescue teams will be increased.

The Turkish Red Crescent (Kızılay) and the Religious Affairs Directorate Foundation have also rushed to the aid of those affected by the earthquake in Nepal.

Nepalese Prime Minister Sushil Koirala told the media on Tuesday that the death toll from the devastating earthquake could reach 10,000. Koirala noted that the government is doing all it can for rescue and relief but that it is a challenging and very difficult time for Nepal. The United Nations said 8 million people were affected by the quake and that 1.4 million people were in need of food.

Nepal’s most deadly quake in 81 years also triggered a huge avalanche on Mount Everest that killed at least 17 climbers and guides, including four foreigners, the worst single disaster on the world’s highest peak.