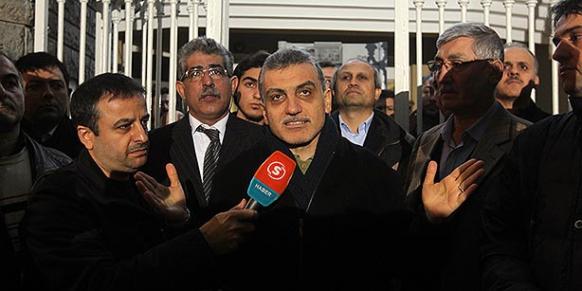 Speaking to Today’s Zaman regarding the planned appeal to the top court, one of Karaca’s lawyers, Fikret Duran, stated that since the Penal Courts of Peace consecutively rejected appeals seeking Karaca’s release, the right to file an appeal with the Constitutional Court to reverse the local court’s verdict became possible.

Stressing that there is no hope remaining that the local courts will release Karaca, Duran said a verdict by a Penal Court of Peace can only be reversed by another Penal Court of Peace, leaving no hope for the release of those arrested. Moreover, he said the demands for release are not handled properly and that the court rejects them without providing sufficient reasons.

“According to Article 19 of the Constitution, there should be solid evidence and strong suspicion proving that the suspects were involved in the alleged offense. Though the recent amendment to the law concerning the arrest of people on the basis of reasonable suspicion is a fact, Article 19 of the Constitution bans anyone from being put in jail based on reasonable suspicion,” Duran added.

Karaca was detained on Dec. 14 along with dozens of journalists, scriptwriters and police officials, including the editor-in-chief of the best-selling Zaman daily, Ekrem Dumanlı, on Dec. 14 over charges of heading a terrorist group based on a TV series that was broadcast years ago on the Samanyolu TV channel.

The İstanbul 1st Criminal Court of Peace on Dec. 19 ruled for the arrest of Karaca and three former police officers. Karaca refused to defend himself before the court as he viewed the court as lacking impartiality and independence.

Fifteen other people, including scriptwriters, were released by the prosecution after being initially detained in the Dec. 14 crackdown on the media.