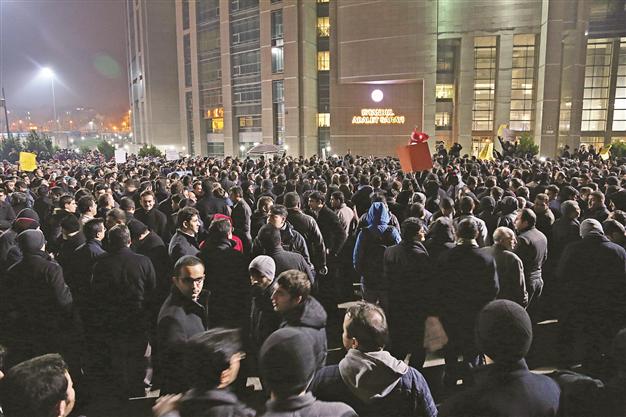 A large group of people, supporters of the Gülen movement, gathered in front of the Çağlayan courthouse late Dec 11. (Photo: Hurriyet Daily)

Islamic scholar Fethullah Gülen has called on his supporters to remain calm and be patient in the wake of rumors that Istanbul police were planning to start an operation to round up hundreds of people close to his movement.

Gülen called for patience and calm among the relatives of those who are being probed or expecting probes against them, advising them to pray and read the Quran, according to the Herkül.org website, which released his latest speech in a video.

“Those [operations] are completely … a perception operation that targets people’s psychology. But they do not know that when these have passed, they will be stronger,” said Gülen, adding that those who conduct the operations will receive payback in the future.

Hundreds of Gülen sympathizers gathered in front of the Zaman office and the police headquarters in Istanbul late on Dec. 11 in solidarity with journalists who were expected to be arrested. Journalists from daily Zaman and a group of supporters went to the Çağlayan courthouse in Istanbul on Dec. 12 and asked whether prosecutors were conducting such an operation. The journalists said the prosecutors told them that they were not aware of such an operation.

In his most recent tweets posted on Dec. 10, a mysterious Twitter user named “Fuat Avni,” whose identity remains unknown, suggested that several journalists close to the Gülen movement, including Ekrem Dumanlı, the editor-in-chief of daily Zaman, would be detained in a raid on Dec. 12. He also gave many details about the dates, names and cities of alleged police operations, but later on Dec. 11 he posted more tweets suggesting that the police operations had been canceled after the raid was revealed.

“I find the Twitter posts to be serious. I hope they will not come to pass, or not come true to this extent, for anything to happen out of jurisdiction,” Arınç said during budget discussions at Parliament late on Dec. 11.

Dumanlı told the supporters gathered in front of the daily’s building late on Dec. 11 that there was a “problem with the protection of freedom of speech in Turkey.”

“Those who take this issue as a matter between a [Gülen] community and a political party [the ruling Justice and Development Party – AKP] are wrong. Fundamental human rights are under threat in Turkey. But we are not hopeless. The media, the Parliament, the people cannot be silenced in this country,” he said.