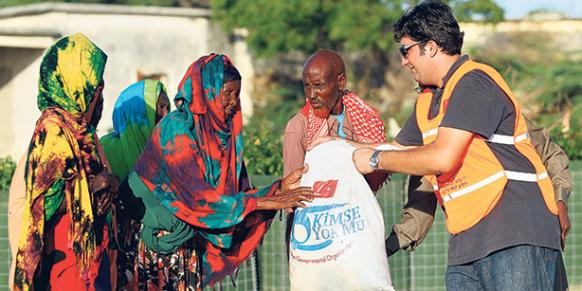 There is no doubt that the globalization of today’s economic and political structures has created huge gaps between the developed and developing countries, which results in unparalleled inequalities where millions of people suffer from not having access to enough food to survive.

According to the World Food Program (WFP), which fights hunger worldwide, almost 805 million people around the world go to bed hungry every night. According to the most recent WFP statistics, the vast majority of the world’s hungry people live in developing countries, where 13.5 percent of the population is undernourished.

The globalization of the problems of our world has also bolstered the understanding of cross-cultural efforts of solidarity and assistance. With regard to the rise in problems in our world, the growth of international aid organizations has also been apparent.

In response to my questions, Kimse Yok Mu explained its focus areas as follows:

Established in 2002, Kimse Yok Mu focuses on disaster relief, humanitarian aid and education of vulnerable populations, accessible health care and cataract surgeries, post-conflict/post-disaster development, capacity building and increasing access to clean water. It extends help to people regardless of race, religion or gender. Over the past three years, 3,056,432 people have donated to Kimse Yok Mu. It has over 100,000 international dedicated volunteers and millions of people have benefitted from Kimse Yok Mu around the globe.

Kimse Yok Mu a solution partner to the UN

Holding consultative status at the United Nations ECOSOC, Kimse Yok Mu is also a solution partner of the UN. Reliability and transparency are the organization’s main principles, and it works in coordination with relevant UN bodies, NGOs and governments. It also developed international relief programs in partnership with UNHCR in 2013 as well and was granted the Turkish Parliament’s Outstanding Service Award in 2008. The organization has also received several awards and letters of appreciation from dozens of other countries, including Haiti, Pakistan, Peru, the Philippines and Somalia.

Over the years, 1,622 water wells were drilled in 17 countries. A total of 25,577 cataract operations were carried out in nine countries. Four social complexes, including hospitals, schools, kitchens and dormitories, were built in Somalia, Uganda, Ethiopia and Kenya. Thirty-five schools were built in 12 countries. A total of 59,564 orphans were supported in 56 countries and 15 orphanages were built with another 12 orphanages renovated. Following a flood in 2010 in Pakistan the town of Iqbaliye was built for the local population. Kimse Yok Mu’s disaster team, ASYA, assisted following 14 huge disasters, providing search and rescue, medical rescue and psychosocial support. More than 200,000 families in need received humanitarian aid in Turkey. Millions of families in 113 countries who were suffering from hunger benefitted from Kimse Yok Mu’s relief assistance and more than TL 70 million in relief assistance has been provided for Syrian refugees.

And in response to that unbelievable success story President Recep Tayyip Erdoğan’s cancelation of Kimse Yok Mu’s license to collect donations without prior permission from local authorities. By doing that Erdoğan and his former government did not hesitate in halting the ongoing operations promised by the organization around the world.

It is no secret that Erdoğan is trying to exterminate the Gülen movement not only in Turkey but around the world. The civilized world openly sees what is happening in Turkey and that the main reason behind Erdoğan’s anger is a corruption probe which became public last year and resulted in four of his Cabinet ministers resigning thereafter. Erdoğan sees the Gülen movement as an obstacle to institutionalizing his own regime.

Thwarting the ongoing operations of an aid organization which is based on humanitarian values, provides another indication of Erdoğan’s personality and leadership style and his decision making process. It is a very powerful indication that in thwarting the ongoing operations of an aid organization Erdoğan failed to have the empathy for those in need of this assistance throughout the world. It’s a very clear sign that Erdoğan makes decisions not based on ethical considerations but only regarding the interest of his own and close circles. It’s a very powerful clue that Erdoğan views the world as a dichotomy that makes him view everything as for him or against him, which sometimes justifies the thwarting and extermination an aid organization.

A leader without empathy for the poor and those in need cannot provide a peaceful and prosperous environment for his country or act as a neutral mediator in any regional conflict.
The question is whether the world will raise its concern for the misconduct of Erdoğan or not. Along with Kimse Yok Mu, millions of people around the world expect you to be their voice.

*Aydoğan Vatandaş is an investigative journalist based in New York.

Stressing that In Turkey or elsewhere, authoritarian rulers have exploited the differences within the society to polarize various groups against each other, Gülen said “citizens should come together around universal human rights and freedoms and be able to democratically oppose those who violate these rights.”