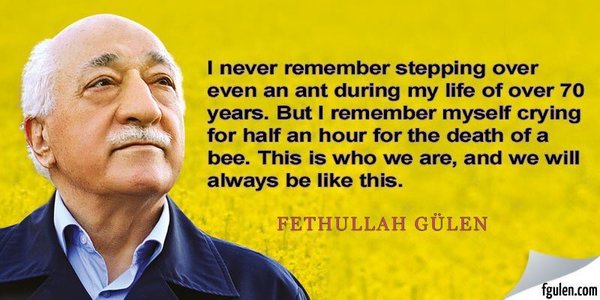 There has been a systematic campaign in Turkey by the Erdoğan regime and its acolytes to provoke the followers of the Hizmet Movement into violence and portray the movement as a violent organisation.The Defamation and dehumanisation campaign against the movement that had already accelerated after the December 17 corruption probe have transformed into the religious persecution of the Hizmet movement and an indiscriminate crackdown on the Hizmet people and dissenting voices after the July 15 coup attempt. Despite all efforts of persecution, imprisonment, abductions, ill-treatment, and tortures, the movement has maintained its peaceful resistance and has not resorted to any violent response. While the Erdogan regime has been struggling to create an opposite perception, there appears to be a new concentrated effort by the regime that would lead to the portrayal of the movement as an (inter)national security threat.

Last week (13 August 2017), in his weekly broadcast sermon, Gülen talked about a widely circulated rumour of a plot, that some important public figures will be assassinated in Turkey, and the blame will be put on the members of the Hizmet movement. Gülen’s message was distorted by pro-Erdogan and anti-Gülen media circles as ‘an order of assassination to his followers’. On 15th August, online access to the video was blocked by the İstanbul Chief Prosecutor’s Office. On 18th August, it was reported that two people who were members of so-called ‘FETÖ and PDY’ were arrested in Balikesir in preparation for the assassination of prominent figures, which in reality turned out to be a case of fraud. Yesterday, Gülen published a message condemning these new defamation efforts by Erdoğan regime.

Although this plot has not materialised yet, that would not be the first time that the pro-Erdoğan and anti-Gülen media circles (comprising mostly of Turkish media) pinned the blame on Gülen and his sympathisers without any evidence. In 2015, it was falsely reported that Gülen ordered the assassination of President Erdogan’s daughter Sümeyye. The news made to the headlines in the pro-Erdogan media outlets. The only evidence for the assassination was a twitter conversation between 3 people, including a journalist and 2 opposition MPs, which was later revealed to be fake.

Similarly, when Andrey Karlov, Russian ambassador to Turkey was assassinated by an off-duty police officer in Ankara, Erdogan had no doubt that the assassin belonged to the Gülen Movement, although he did not offer any evidence for his claim. Later, it was reported that Jabhat Fath al-Sham (formerly the al-Nusra Front) claimed responsibility for the murder, which they denied later. The authorities have not conducted any further investigation on the case.

One can observe a similar pattern in the case of the 15 July coup attempt last year. President Erdoğan and PM Yıldırım were quick to pin the blame on Gülen for the coup attempt, despite the fact, as acknowledged by Yıldırım, that they did not have any intelligence or evidence about the identity or affiliation of the putschists when they had initially blamed Gülen and the Hizmet Movement. Even though they insist on blaming Gülen and his followers, which resulted in a massive purge, there is still no hard evidence that links Gülen to the coup attempt.

“Hizmet’s core principles and teachings are against use of violence. According to Gülen, peace and peaceful resistance is the default position. In any case, an action’s religious, moral and legal legitimacy is compulsory; therefore, political reasons cannot justify the use of violence. Even at the time of great hardship and persecution, peaceful resistance has been at the centre of Hizmet’s philosophy. Since its inception fifty years ago, Hizmet people has been consistently peaceful even at times of political persecution such as  the1980 coup and 28 February (1997) military memorandum. It would be entirely irrational to expect Gülen and Hizmet people to act against these fundamental teachings.”