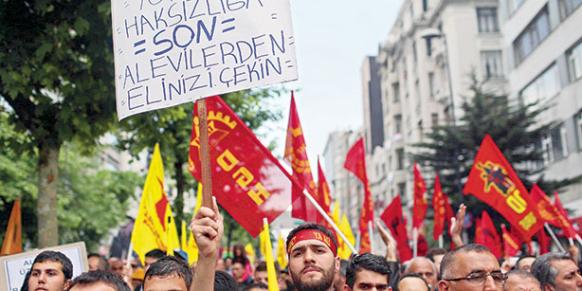 The US State Department Bureau of Democracy, Human Rights and Labor released its 2013 “International Religious Freedom Report” on Monday.

In its Turkey section, the report said that the US government estimated the Turkish population to be 80.7 million as of July 2013. The report also mentioned that according to the Turkish government, religious affiliation within the country is 99 percent Muslim, with the majority practicing Hanafi Sunni Islam, but “representatives of other religious groups state the actual percentage of Muslims is slightly lower.”

The report says that academics estimate there are between 15-20 million Alevis in Turkey, and that “other religious groups, mostly concentrated in İstanbul and other large cities, together constitute less than 1 percent of the population.”

According to the report, some groups estimate that approximately 2 percent of the population is atheist.

The State Department report added: “Non-Sunni Muslims, Christians, Bahais and members of other minority religious groups faced threats and societal suspicion, and Jewish leaders reported some elements of society continued to express anti-Semitic sentiments. Because ethnicity and religion were often inextricably linked, it was difficult to categorize many incidents specifically as ethnic or religious intolerance.”

The report expressed the concern of many Jewish leaders, some of whom “ attribute anti-Semitic graffiti and threats to events in the Middle East and anti-Semitic rhetoric by Prime Minister [Recep Tayyip] Erdoğan and other government officials.”

The Gezi Park protests which started in İstanbul last summer were described in the report as “anti-government protests.” The report also said that “Erdoğan and several senior government officials repeatedly and publicly blamed ‘shadowy’ international groups for the unrest, including … an ‘international Jewish conspiracy’ [and an] ‘interest-rate lobby’.” The report pointed out that in July last year, “Deputy Prime Minister Beşir Atalay blamed the ‘Jewish diaspora’ for the Gezi Park unrest, [and that] these statements by senior political leaders were accompanied by anti-Semitic reports and commentaries in media outlets friendly to the government.”

According to the report, “[the Turkish Constitution] and other laws and policies generally protect religious freedom, although there were some constitutional provisions, laws and policies that restrict religious freedom.” While the report praised the government for lifting the ban on headscarves in public except for judges, prosecutors, police and the military, it criticized the failure to approve the opening of the Greek Orthodox Halki seminary, which has been closed more than 40 years.

The report also cited the government’s announcement that it will return “disputed land to the Mor Gabriel Syriac Orthodox Monastery” as a positive development.

Problem of Alevi places of worship

The report also described Islamic scholar Fethullah Gülen as a “well-known Sunni theologian,” while mentioning his support for three Alevi and three Sunni businessmen who conducted a ground-breaking ceremony in Ankara in September for a religious and cultural complex which included — for the first time — a mosque and a cemevi side by side. However, 11 Alevi foundations last year released a statement condemning the construction, calling it a “project of assimilation.”

“Although religious speech and conversions are legal, some Muslims, Christians, and Bahais faced government restrictions, surveillance, and harassment for alleged proselytizing,” said the report. The report mentioned that it was “generally not possible” for foreigners to obtain a “religious worker visa” in Turkey, although the government claims it is possible. Several foreigners, including US citizens, who resided in Turkey under other visa categories “were deported after requesting religious worker residence permits,” the report claimed. Persons wishing to convert from Islam, according to the report, experienced harassment and violence from relatives and neighbors.

“The government continued not to recognize the status of the Ecumenical Patriarchate as the leader of the world’s 300 million Orthodox Christians, consistent with its stance there was no legal obligation to do so,” the report said. Turkey says the Patriarch is not “’ecumenical,’ but only the religious leader of the country’s Greek Orthodox minority population.”

According to the report, Bahais, Alevis and Yezidis are unable to have their religious identity stated on their national identity cards because their groups are not listed as options.

The chief characteristic of the Gulen movement is that it does not seek to subvert modern secular states, but encourages practising Muslims to use to the full the opportunities they offer.