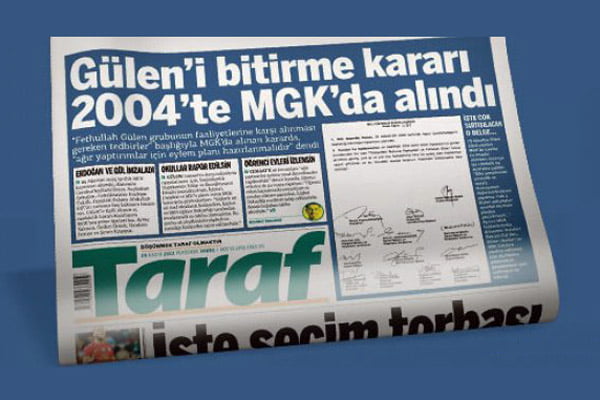 The Prime Ministry, the National Security Council (MGK) and the National Intelligence Organization (MİT) have filed a criminal complaint against the Turkish daily which has revealed that Turkey’s ruling Justice and Development Party (AK Party) government signed on to a planned crackdown on the Hizmet (Gülen) movement.

The Prime Ministry, the National Security Council (MGK) and the National Intelligence Organization (MİT) have filed a criminal complaint against the Turkish daily that revealed that Turkey’s ruling Justice and Development Party (AK Party) government signed on to a planned crackdown on the Hizmet (Gülen) movement.

A week after the Taraf daily published a document prepared by the MGK on Aug. 25, 2004, persuading the government to implement a series of measures to curb the activities of the Gülen movement, three state bodies have filed a joint criminal complaint against the daily at the Ankara Prosecutor’s Office for revealing secret documents.

The document published by the daily on Nov. 28 shows that the MGK advised the government to adopt legal measures that would impose harsh penalties on Gülen-affiliated institutions.

The document, identified as MGK decision No. 481, asked the government to develop an action plan to pursue the MGK’s recommendations and instructed the Prime Ministry Implementation and Monitoring Coordination Council (BUTKK) to coordinate the ministries and monitor whether the steps were being implemented.

The document states that the government must ensure that the financial activity of Gülen-affiliated businesspeople be monitored thorough the Finance Ministry’s Financial Crimes Investigation Board (MASAK). The MGK wanted the Ministry of Education to investigate Gülen-affiliated schools as well.

The document further comments on the psychological aspects of an operation against the Gülen movement, describing the use of defamation tactics.

The MGK is the top state body, created by the 1960 military coup. It was seen as a shadow government while the military was in power. Furthermore, it ruled the country directly from 1980 to 1983 before transferring power to the civilian government.

Yet the military became part of the executive branch through the MGK, joining the president and a committee of ministers. It became the final authority in decisions on a wide range of issues, including law, the economy, education, rights and freedoms. Though its decisions were expressed as advice on paper, they behaved as direct orders to the government.