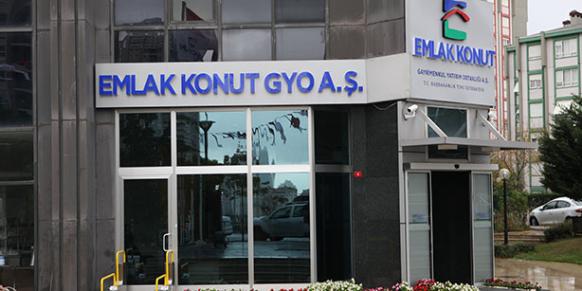 View from an Emlak Konut office in İstanbul. (Photo: Zaman)

TUSKON — a business confederation known for having ties to the Islamic scholar Fethullah Gülen-inspired Hizmet movement — acquired the land in 2011 in a tender put out by the Finance Ministry, and agreed to rent it for 49 years at a price of TL 1.6 million per year. However, earlier this year, the Prime Ministry attempted to cancel the ongoing authorization process, which had already been extended on two occasions. A subsequent court decision resulted in a stay of execution which barred the cancellation of the process.

However, according to TUSKON’s statement, a new tender was opened for the 36,000-square-meter piece of land on Monday by Emlak Konut GYO — a subsidiary of the Housing Development Administration of Turkey (TOKİ) — in defiance of the court decision. A total of 13 companies participated in the first session of the tender process on Monday.

“Unfortunately every day the law is broken, judicial decisions are not respected and the basic principles of democracy are being destroyed by those in power in this country,” said TUSKON in its statement. This development is the latest in a series of attempts by the ruling Justice and Development Party (AK Party) to destroy the financial integrity of the Hizmet movement. Since corruption investigations that went public on Dec. 17 of last year, the government has attempted to portray the Hizmet movement as a “parallel state” that orchestrated the investigations to overthrow the government.

The corruption investigations have been halted and the government continues to go after the Hizmet movement. It has attempted to sink the Islamic lender Bank Asya, which is affiliated with the movement, and revoked the license of Hizmet-linked charity Kimse Yok Mu? (Is Anyone There?), thus preventing it from receiving donations.