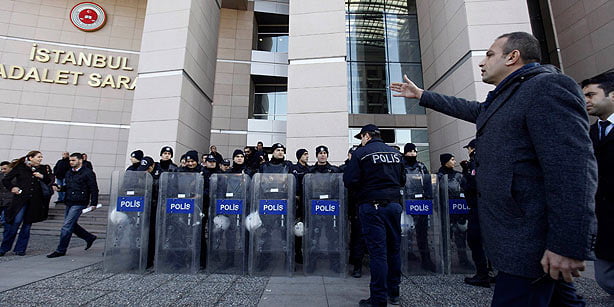 Opposition Nationalist Movement Party (MHP) Ankara deputy Özcan Yeniçeri submitted a parliamentary question to the Justice and Development Party (AK Party) government asking how many state officials or civil servants have been reassigned or dismissed by each ministry since a major corruption scandal erupted that implicated top government officials.

Yeniçeri directed his request to Parliament Speaker Cemil Çiçek, Prime Minister Recep Tayyip Erdoğan and all other ministries. Asking for a written response, Yeniçeri’s question said: “What is the exact number of individuals who have been reassigned, dismissed or promoted at the institutions and organizations under the Prime Ministry and all other ministries since Dec. 17, 2013? Who are those individuals and what were their duties? What were the reasons for their reassignments, dismissals or promotions?”

Yeniçeri also asked how many of those reassigned or dismissed had filed a complaint against any institution or organization under the Prime Ministry or any other ministry since Dec. 17 of last year and for the names and duties of those individuals.Since the widespread corruption and bribery investigation became public, thousands of police officers have been reassigned or removed from their posts because of alleged links to the Hizmet movement, inspired by the teachings of Turkish Islamic scholar Fethullah Gülen. The government and circles close to it have accused the movement of manufacturing the corruption investigation in an effort to topple the government.

In addition to the thousands of police officers, the government has replaced the prosecutors who initiated the investigation as well as dozens of officials at various state institutions, including public prosecutors’ offices.

The guardianship regime was in control of the country for over a century. It did not want to share its power with anybody. There was only one option left: to intimidate, to repress, to brutalize and to make others submit. To achieve this, it laid the groundwork through provocations and psychological warfare tactics; it created […]