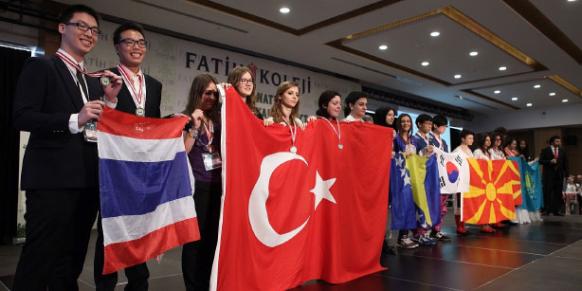 Young people from 45 countries across the world came together at the 22nd INEPO, which was held in İstanbul’s Fatih College on May 9-12. Combining their efforts to push for a more livable environment in the world, 270 young environmentalists competed with each other in 113 projects addressing various areas, from countries including Ukraine, Germany, Iran, several Central Asian and Middle Eastern countries, Azerbaijan, Bosnia and Herzegovina, Thailand, South Korea, Macedonia and Albania. Turkey, being a host country, was also represented in the competition.

Bringing together the young environmentalists of the world, INEPO helps them display their solutions to environmental problems and inform the public and world about the environment, said Fatih Educational Institutions Corporate Communication Coordinator Kemal Pehlivan while opening the awards ceremony of the 22nd INEPO in İstanbul on Monday.

The four-day competition was a platform where different projects, from agriculture to sustainable energy, were on display for the public starting since Saturday. The successful competitors in INEPO were given awards of gold, silver and bronze medals in Fatih College’s Congress Center on Monday.

Two young environmentalists from South Korea, Jun Ho Song and Han Seul Ryu, both 17 years old, became some of the few gold medal winners. Song and Ryu expressed their excitement about being in Turkey for the first time, talking in an interview with Today’s Zaman, and explained their project, which is about a new approach to gel electrophoresis. The two aim through their project to use a novel method to recycle water contained in sludge and resolve the environmental problem of disposing of this sludge.

Excited about the competition, Ryu said INEPO will be memorable for them as well because they got to know many young people from around the world who are also concerned about protecting the environment. “We enjoyed interacting with other cultures and learning about other people’s projects. We really thought that there were many interesting and creative ideas among the projects,” Ryu said, hopeful that she and Song can meet these young environmentalists again soon.

Aighanym Ashimbayeva and Aiziya Ryskulbekova from Kazakhstan were among the winners of the bronze medal at INEPO, and also expressed their excitement about the competition, as they think the competition pushes the boundaries of skills and knowledge.

“I am excited to be here. I am very emotional because we have won a bronze medal. I am between crying and laughing,” Ryskulbekova said.

Ryskulbekova, along with Ashimbayeva, designed their joint project, which is about dryland management and carbon sequestration. The project is directly linked to protecting and enhancing the environment through reversing land degradation, improving carbon sequestration, improving surface and ground water quantity and quality and enhancing biodiversity. The young ladies think global benefits will result not only from improving biodiversity but also from sequestering atmospheric carbon dioxide that could potentially be traded as carbon credits with industrialized nations that are sources of CO2 emissions.