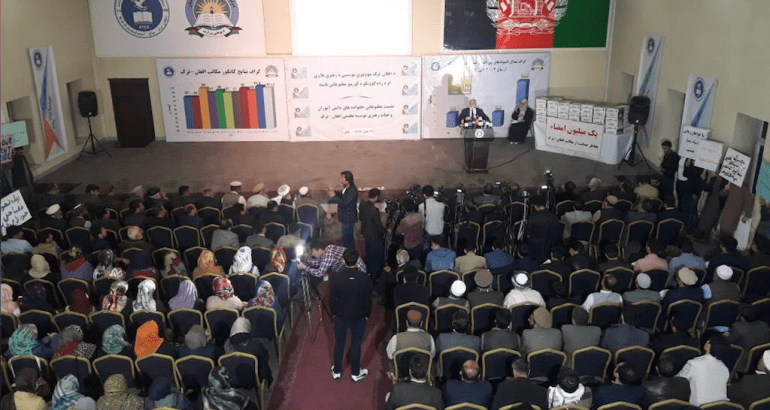 The Parents’ Committee of an Afghan-Turk school held a press conference on Wednesday in the conference hall of Ariana Boys High School in Mazar-e Sharif in northern Afghanistan’s Balkh province and vowed to defend to the end the school against the attacks of the Turkish government.

During the press conference the parents commented on a Tuesday raid conducted by a group of Turkish officials led by Turkish Consul General Şevki Seçkin Alpay together with dozens of Turkish soldiers and Afghan military police on an Afghan-Turk school in Mazar-e Sharif and defined the raid “as an open attack on Afghan territory and in particular on their privacy.”

An armed group that was also accompanied by the Turkish Cooperation and Coordination Agency’s (TİKA) Mazar-e Sharif coordinator, Zeki Budak, attempted to illegally take over the administration of the school on Tuesday. However, they encountered strong resistance from parents of Afghan-Turk school students, who refused to allow the group to take control of the school.

According to eyewitnesses, a group of parents resisted the intruders and shouted, “There’s no place for thieves here!” while the school’s garden filled with armed soldiers and military vehicles. The school was reportedly surrounded by military police and the Turkish diplomats’ armed guards. The diplomats and military police were ultimately unable to take over management of the school and hand it over to the Maarif Foundation as planned.

Reminding that “the consul general of Turkey in Mazar-e Sharif together with Turkish troops and some officials from the Afghan government raided the Afghan-Turk school in Mazar-e Sharif without giving prior notice, like a thief, to try to take over the administration of the school,” the parents stated that “despite this insane and illegal raid, they were unable to enter the administrative office of the school due to the reaction of the Parents Committee of the Afghan-Turk school.”

The parents’s committee also released a statement that said:

“Firstly, we consider the offensive that the Turkish Consulate has conducted in the presence of some Afghan officials to be an open attack on Afghan territory and in particular on our privacy.

“Secondly, Turkish Consulate officials and the troops accompanying them intended to detain Turkish teachers by defining them with various labels and take them to Turkey for imprisonment despite the fact that the only crime they have committed is offering quality educational opportunities to our children for many years. We will continue to resist this conspiracy to the end.

“Thirdly, we invite the officials of the Afghan government to respect our national values ​​and at least our educational privacy by halting support for those who conspire against us.

“Fourthly, we want to declare once again that we will respect the rule of law and the national values ​​of our country, but we will continue to stand against unlawful acts against Afghan-Turkish schools to the end.”

According to a report by the Did Press Agency on Thursday, a delegation from Afghanistan’s Ministry of Education that recently traveled to northern Balkh province to change the management of the Afghan-Turk school encountered the angry reaction of the families.

The families of Afghan-Turk students insist that if the Turkish government is interested in working with Afghanistan, it should focus on other schools in the country.

“As a parent, I have had contact with this institution for 13 years, and my four children have studied at this high school [Afghan-Turk]. We are in debt to those who have served us. Other schools should be built and compete with these schools,” said Nelofar Sayyar and Mohammad Yaqub, the parents of students at the Afghan-Turk school in Mazar-e Sharif.

The raid in Mazar-e Sharif came just a week after an official visit by Turkish Prime Minister Binali Yıldırım to Kabul, whose top agenda item was reportedly to assure the transfer of the Turkish schools to the Maarif Foundation.

Although a protocol was signed on February 26, 2018 for the transfer of these schools to the foundation, it has not yet been implemented by the Afghan administration. Turkish media reported that Yıldırım tried to put pressure on the Kabul administration during his recent visit to assure the implementation of the protocol.

However, the parents of Afghan students who have received a quality education at the schools operated by the Afghan-Turk Çağ Educational NGO (ATCE) reacted against the demand voiced by Prime Minister Yıldırım. The Afghan parents, who have collected 1 million signatures to prevent the transfer of these schools to Erdoğan’s Maarif Foundation, said, “The Turkish government must treat the Afghan nation with respect.”

Afghan Turk International School and Colleges are members of a chain of Afghan and Turkish educational institutions established in 1995 and have been run under the auspices of the ATCE for the pursuit of excellence in education in Afghanistan. The ATCE has been serving Afghan children for 23 years with 12 high schools, four primary schools, four test preparation schools, dormitories and laboratories across Afghanistan.

The controversial Maarif Foundation was established by the Islamist Turkish government led by President Recep Tayyip Erdoğan after a July 15, 2016 coup attempt in Turkey to take over the administration of overseas schools allegedly linked to the Gülen movement. To date, it has taken control of dozens of schools established by volunteers of the Gülen movement in such African countries as Somalia, Guinea, Niger, Sudan and the People’s Republic of Congo.