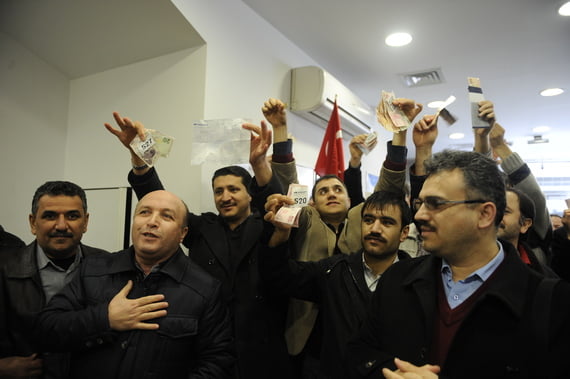 Customers brandish banknotes as they prepare to deposit in their Bank Asya accounts in the western Turkish city of Canakkale. (Photo: Cihan)

In an unprecedented display of solidarity to bail out a bank that has been a target of a relentless campaign waged by the Turkish authorities for over a year, Turkish depositors flooded the branches of the bank across Turkey to save it from the president’s wrath.

Twitter and Facebook filled with photos of people waiting in long lines to deposit what they have in cash or jewelry, signaling that the government’s attempt to sink the bank will end in vain.

The picture could seem as a joke, but it is not. This is the second campaign by loyal depositors, albeit a bigger one, to dash the hopes of Turkey’s bellicose President Recep Tayyip Erdoğan, who reportedly ordered to sink the bank.

Erdoğan’s unceasing bid to bury the bank is largely driven by his declared witch-hunt against institutions affiliated with the Gülen movement. In the latest twist to a saga, a banking watchdog ordered the state insurance fund to take over the management of the bank. The news of the takeover came minutes after Turkey’s famous whistleblower Fuat Avni warned against a campaign by the Turkish government and the pro-government media to portray the bank as “failing” to prompt “sudden mass withdrawals” and hence speed up its demise.

The authorities have so far been unsuccessful to end the bank’s life as loyal customers kept it afoot by depositing their assets. The government views the fall of the bank as an important milestone in dealing a blow to the Gülen movement, which has been adamant to bow before the president’s increasingly growing clout.

On the social media, Turks shared photos of their jewelry before they were deposited in gold accounts. Given that refined jewelry loses significant value when deposited in a bank account, the sacrifice of the depositors is jaw-dropping.

Here are some photos of long lines in Bank Asya branches across Turkey: