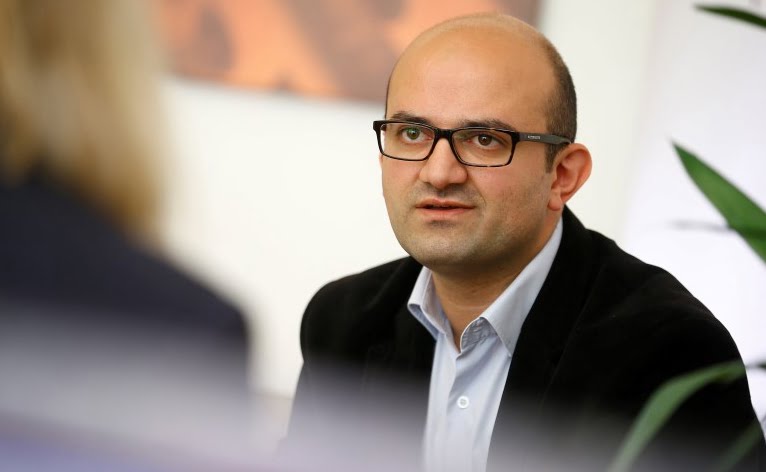 Ercan Karakoyun, chairman of the 'Dialogue and Eduction Trust' in Berlin, Germany. The 37-year-old, who is the public face of the movement of Muslim cleric Fethullah Gulen in Germany, says he has received several death threats since the aborted military coup in Turkey.

BERLIN –  Ercan Karakoyun looks twice over his shoulder when he leaves his Berlin home to make sure nobody is following him.

Karakoyun is a follower of Muslim cleric Fethullah Gulen, whom Turkish President Recep Tayyip Erdogan blames for an attempted military coup in Turkey last summer. The 37-year-old, who is the public face of the Gulen movement in Germany, says he has received several death threats since the aborted overthrow.

The hostility hasn’t escalated past the anonymous threats, but Karakoyun’s experience is one happening across Europe as Turkey’s government tries to root out and punish the U.S.-based Gulen’s supporters both within Turkey and abroad.

“The witch hunt against us has reached a new level,” Karakoyun, the son of Turkish immigrants and spokesman for the Gulen-affiliated Dialogue and Education Foundation in Germany, told The Associated Press.

Surrounded by religious books in the foundation’s Berlin office, he recounted how German police contacted him last week and warned him not to travel to Turkey.

Karakoyun was among more than 300 individuals and dozens of institutions on a list the Turkish foreign intelligence agency MIT gave its German counterpart. MIT asked to have those named put under surveillance.

To Ankara’s irritation, German officials instead contacted and cautioned the individuals on the list, which included at least two German lawmakers.

Gulen has been based in the United States since 1999 in self-imposed exile. His movement, centered on moderate Islamic teachings, ran schools and dormitories that grew into a worldwide network and where, Turkey says, his followers were groomed and eventually infiltrated state organs, including the judiciary, police and military.

Turkish authorities say the coup-plotters arrested on the night of the coup were Gulen supporters. Among the evidence they have offered against them is an encrypted messaging application that prosecutors have claimed the coup-plotters used to communicate with each other.

In Turkey, tens of thousands of Gulen’s followers have lost their jobs or landed in jail. Erdogan has also called on nations to crack down on the Gulen movement’s large network of schools and charities outside of the country.

The tension between supporters of Gulen, who has rejected any involvement in the failed coup, and Erdogan’s allies has become especially heated in recent weeks. Erdogan’s government has been campaigning in Germany and other European nations to try to win support for an April 16 referendum that would expand the president’s powers.

An estimated 3 million expatriate Turks were eligible to cast ballots in what is expected to be a close vote. About half live in Germany.

Turkish officials’ attempts to rally support for the referendum in other European countries caused widespread irritation in Germany. Several of their planned public events were canceled. Erdogan accused German officials of acting like Nazis, sniping that in turn prompted Chancellor Angela Merkel to publicly condemn his comment.

Tensions also flared In the Netherlands when the Dutch government blocked two Turkish ministers last month from addressing political rallies. Turks who gathered outside the country’s consulate in Rotterdam briefly clashed with police after Turkey’s family affairs minister was prevented from entering the building and escorted back to the Germany border.

Similar scenarios have played out elsewhere in Europe, where Gulen’s supporters allege that members of Erdogan’s AKP Party are involved in whipping up the threatening atmosphere among Turkish immigrants.

In Denmark, more than 500 children have left 14 schools that the Turkish government singled out as being closely related to Gulen. Some parents said they received anonymous calls saying they would be arrested in Turkey or have their passports canceled if they didn’t take their kids out of the schools.

In Germany, where the movement operates dozens of schools, educational centers and youth clubs, many families also have pulled out.

Several calls and emails for comment on these allegations by the Union of European Turkish Democrats, which is close to Erdogan’s AKP, went unanswered.

Gulen followers are not the only ones complaining about threats from Erdogan supporters.

Cem Ozdemir, a member of the German parliament and one of the heads of Germany’s The Green party, said he has been verbally attacked by Turkish taxi drivers in Berlin who were upset about his anti-Erdogan stance.

Sevim Dagdelen, a Turkish-German lawmaker with The Left party, said she received death threats after speaking out publicly against Erdogan. After Turkish newspapers published her picture and berated her as a traitor, people in Germany attacked or insulted her on the street, she said. She has been put under police protection and warned not to go out with her children in public. Still,

The Parliament member can also no longer travel to Turkey, even though she is her party’s expert on the country.

Dagdelen, the daughter of Turkish guest workers who came to Germany in the 1960s, called on the German government to help protect dissidents of the Erdogan regime both in Germany and Turkey, but expressed little hope that the situation would improve soon.

“I don’t believe that Erdogan will let himself be influenced by the outcome of the referendum in April,” she said. “He has already made the decisions regarding his agenda a long time ago — namely to turn Turkey into an oppressive Islamist regime.”